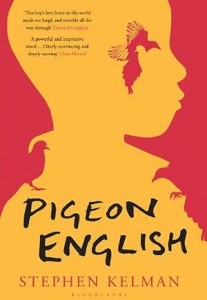 Stephen Kelman’s debut novel Pigeon English, despite being an adult novel, is highly telling of the way in which fiction for children and young adults is viewed. The most interesting part of its acquisition is not that it was a slush-pile find or sold for a six-figure sum at auction, but that it was originally submitted as a children’s book.

Described by The Times as ‘the new Curious Incident of the Dog in the Night Time’, Pigeon English is the story of eleven-year-old Harri, a recent Ghanaian immigrant to a council estate in Peckham, and his attempts to solve the murder of an older boy at school. On the surface this seems to be a fair comparison as the narrative perspective of both novels is innocence, revealing the ‘seedy’ nature of their surroundings through this innocence. However, whilst Haddon’s novel was published in simultaneous adult and children’s editions, Jo Unwin (Kelman’s literary agent) laughs that Kelman could ever have considered Pigeon English to be a children’s text. Upon speaking at an event for children’s authors she said ‘sure, it uses a child’s voice, but its themes are definitely adult’.

Adult themes? Children’s fiction has been exploring ‘adult themes’ for at least thirty years. Melvin Burgess alone has written books that focus on sex, drug abuse, mental illness and shocking violence. Even incest is accounted for in the children’s canon these days, with books like Tabitha Suzuma’s Forbidden. Upon reading Pigeon English – which is definitely worth a read – I had trouble working out what exactly qualified the text as exclusively adult. The book revolves around knife crime and gang culture, both of which are thought of as youth problems, so it cannot be the subject matter itself (unless society is becoming less tolerant, which is a discussion for a different forum).

My only theory as to what could disqualify the book from a child readership is the fact that its ending is completely devoid of hope, which is practically unheard of in books for young adults and children. Even Junk closes with a sense of hope, despite the destruction and fate of many of the characters. Pigeon English on the other hand closes on a scene of complete desolation, with no prospect that life for any of the characters will improve. Moreover, Harri does not undergo the journey from innocence to experience; the character remains naive throughout the novel, never developing any awareness of his surroundings or the danger he is in.

So this leads me to question whether the last taboo of children’s fiction is the ‘unhappy ending’, which offers no resolution for the characters involved or hope for the future. Perhaps unhappiness and hopelessness are the last things we can’t say.
Or can someone prove me wrong? Does anyone know of a published children’s book that does not allow the character or reader any hope that life will improve after the end of the story? Has anyone read Pigeon English and would like to offer their opinion?