As graduate students we are encouraged to “broaden our horizons” which entails venturing beyond our specific focus areas. This includes taking courses, attending seminars etc. in areas that we feel would/could/should benefit our intellectual and/or emotional growth. These ‘external supplementary lessons’ can be anything from writing workshops, to courses where one can tweak their computer skills. They can also include lectures on how to better one’s communication and public speaking skills, even stress management support groups. For me, at the beginning of each term, the first port of call in selecting amongst the many graduate development offerings is found on the website of the CPPD (Centre for Personal and Professional Development).

Today I am writing about the latest seminar I attended; one that I am very excited about, as it has come closer to confirming a theory I speculated 6 months ago: the iPad is a revolutionary device that will alter the way we teach and learn. The University Computing Services organized the seminar. It was titled: Apple Seminar – Effective Content Creation & Sharing with Apple Technologies. For me, it was the words ‘Apple’ and ‘Sharing’ that made me sign up. Beyond that, I had no idea what I would be doing there. Also since on the booking site the prerequisite stated:

This course is appropriate for technical staff and IT or Project Managers who preferably have solid IT and OS X skills. Although this course is primarily for IT Support Staff, it is open to all members of the University.

Sure enough, when I arrived and the organizers were passing out the course material, (an iPad 2 for each attendee!) I noticed that not only was I the only student there, but also that almost everyone else seemed to know each other. Aside from being a ‘member of the University’, I did not fit the profile!! Still, I sat and waited for the seminar to begin.

As I have previously mentioned, I am nowhere near tech-savvy but working with picturebooks has compelled me to explore e-versions of the picturebooks I study. I own an iPad 1, and love it, but the biggest problem I discovered was that fact that I could not share my content with others simultaneously. I learned this the hard way. Last month I presented at a conference and my talk was on an iPad App. Unfortunately before that, when it came to preparing my slides I realized that I could not just connect the iPad to an outlet and have whatever was on the iPad screen appear anywhere else. In fact it took longer than organizing a regular PowerPoint because I had to take a picture of everything then add it to the PowerPoint. Simply, what I would have liked to do is just have had the iPad on my lap and simultaneously ‘show’ what I was talking about on the bigger screen behind me.

Even if a large part of the seminar was geared toward computer technicians, I was able to follow parts of it. Most importantly, I left with an answer to my dilemma. The seminar was given by Chris Jinks, an Apple Systems Engineer, and was overlooked by Lydia Mulcahy, an Apple Education Accounts Executive. Attending the seminar I learned that what was a gruelling task on the iPad version 1, is simple with version 2. According to Mr. Jinks, it literally requires either a cable or WebDAV. Mobility he explained is the new technology “buzz-word”. 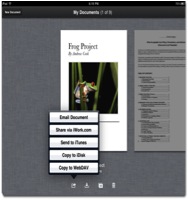 He explained that with mobility, users would be able to access their content anywhere and everywhere. WebDAV, he explained, makes it possible to send and receive documents, video etc. from one iPad to another. In other words, it is the tech protocol to allow sharing. This was the aspect of the seminar I was most excited about. Now I know that the next time I am in a room and want to show what I am viewing on my personal iPad screen, it is finally possible!

After the seminar I had a few minutes to speak with Lydia, we shared some ideas and she told me to look up Dr. William Rankin – an associate professor at Abilene Christian University. (All new students are given iPads) The fact that he is a medievalist makes his views all the more impartial. Look him up (YouTube) his views are groundbreaking.