In 1999, on the eve of the new millennium and a mere four or five years after the birth of the Internet as we recognise it today, Eliza T Dresang identified technology changing children’s literature in three main areas. Writing in Radical Change: Books for Youth in a Digital Age she describes these as 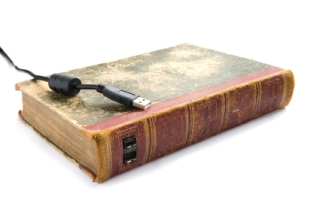 Looking back on predictions for the future from the safety of that future can be seen as a cruel pastime, but in a world which has – in some ways – been dramatically changed by technology over the past thirteen years, Dresang’s descriptions can be seen to be both prescient and slightly flawed.
The changing forms of handheld books can most readily be seen in Amazon’s Kindle (notably already a Hoover/vacuum-like synonym for ‘e-reader’) which first appeared in 2007. The Kindle does allow readers to interact with their reading matter in new ways and words can be glossed or ideas googled from the device. While I still do not own a Kindle, I know that having a smartphone has changed the way I read printed books as I am able to check references or explore related ideas without having to turn on the laptop.
Dresang’s connectivity category also includes books which use new graphic formats and where links between text and graphics are far closer than just, say, a caption or label. However, from the 2012 perspective, this seems to fall more into her second categorisation.
The rapid growth of tablet, or slate, computers since the introduction of the iPad in 2010 as an additional (rather than replacement) screen in people’s homes has already had a massive influence on the way in which texts can be accessed. Unlike the electronic-ink based Kindles, which fundamentally function as a directly replacement for the printed text, books – or more accurately apps – which are being produced for tablets are founded on the idea of interactivity. Last year, one of our blog posts looked at the potential for picturebooks on iPads, and since then the number of such texts has continued to increase apace. However, while picturebooks are well suited for the transition to new media, YA texts are still, for the time being at least, adhering to the traditional linear narrative, even if they are now available on the Kindle.
Similarly, last year’s launch of Pottermore marked a new step in the production of interactive texts as it was web – rather than app – based. While the reception to Pottermore remains mixed, it wholly fulfils Dresang’s description, and as the rest of the series is made available to online readers, it will be interesting to see how a new generation of even more technologically-savvy Harry Potter fans respond to it as both a narrative and web-based experience. As a little aside, it is worth noting that although these examples do take advantage of new media, paper-based ‘interactive’ texts were available in the 1970s in the form of the ‘Choose your own adventure’ series.
While Dresang’s first two categories have generally stood the test of time well, her third is more problematic. In terms of ‘taboo’ subjects and characters previously without voices, these are things which children’s literature has never shied away from and, although not necessarily commonplace, examples going back to the nineteenth century can be found. While the ready online availability of information on any topic imaginable (and probably some unimaginable) in the twenty-first century may have made some ideas more accessible to readers, addressing taboo topics is not a result of the digital revolution.
In terms of individuals’ access to texts and the sharing of information, new technology has arguably made it more difficult for some people as ownership of a Kindle or tablet and Internet access is a pre-requisite. Indeed, despite having a penchant for gadgetry, trying to use the app to make the cover of Lissa Price’s Starters ‘come alive’ by downloading and installing it failed for me, as my two year old smartphone was simply not powerful enough to cope with it. I will nevertheless try it again when I have upgraded my handset. At a financial cost, of course.
Even though the Kindle will celebrate its fifth birthday in a few months’ time, and the third generation iPad was launched earlier this year, this is still a fascinatingly new area to watch for developments as Dresang’s first two categories continue to shape (or be shaped) by changes in technology. Whether aspects of her third will begin to be realised might also give a commentator in 2025 pause for thought.