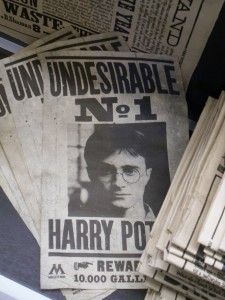 So yes, I’m writing the thesis, but when a friend calls me to say that she’s going with her boyfriend to the Harry Potter Studios at Leavesden and do I want to come along? then the only thing to do is to stop writing the t. and jump into the car, Leavesden-bound.

For those of you who haven’t heard of that new brave new world of Pottermania (and I was one of them), here’s the elevator pitch: while sipping caviar milkshake on the shore of their artificial lake of liquid gold, the Warner brothers reflected that now that the Potter films were all filmed they had all those props and sets and costumes lying around in their attic gathering dust and that they should really give them all to Oxfam. Or alternatively, stack it all in half a dozen gigantic hangars and ask people for £28 in non-Leprechaun money to come and look at them.

They thought about it for about half a second, and settled for the latter option.

Now, Harry Potter is more or less the most important thing to have happened to me in my late childhood and for all of my adolescence, but I’m not a huge fan of the films at all. And  I’m even less of a fan of enormous American money-making corporations such as WB. So I wasn’t expecting to love the visit: I was expecting to have fun superficially while grinding my teeth at what they’d done to Jo’s universe and remembering what it was like when no one but me had read the books in my school and now all those untrue fans of the series who discovered it through the films are pretending that they know it better than me. It’s a hard life, you know, having to constantly prove that you’re a better fan than the people who call Emma Watson ‘Hermione’. (‘Have you heard, Hermione’s going to Brown University!’ ‘No she isn’t, and you’re a troll.’ ) (Childish, me?)

But against all odds, I loved it. I absolutely adored every moment of it. Here’s why.

People who think that this exhibition is just for Harry Potter fans are wrong. It isn’t. As a Potter fan, you will have a lot of fun; but even if you haven’t read the books or seen the films, even if you’re not even that interested in children’s literature, you have to go. Because it’s not just about Harry Potter, far from it: it’s an incredible, exhilarating celebration of cinema.

Even though you’ve been told again and again that making a film takes a lot of time, money and people, even for tiny details that only appear on screen for a few seconds, I don’t think you can actually believe it until you see it. That’s exactly what the Studios exhibition does. In the three to four hours that it takes to visit it, you get to see the unbelievable variety of objects, costumes, sets, special effects which you’d never noticed on screen, but which were necessary for the whole thing to function. The incredibly detailed architects’ drawings which preceded the building of the models. The conception of the clothes, wigs, make-up, accessories down to the merest sleeve button. The thought that went into the design of each wand, each wand box. The oil paintings full of private jokes among members of the crew. The wonderful handmade objects of the Room of Requirement which you barely see before they get destroyed by Fiendfyre. The handwritten books and handbooks, the handprinted newspapers and magazines, the handlettered Marauders’ Map.

Everything is beautifully, neatly presented; the aim is to make the visitors feel that they’re walking not from one set to the next, but from one room of Hogwarts to the next. The organisation of the visit is a bit dictatorial: you have to book a timeslot in advance, and don’t you dare arrive late. The exhibition is packed, even in the middle of the week, in the middle of the day. Barely any children, but hundreds of 20-45-year-olds. Yes, it’s a big Disneylandish from time to time, but by no means all the time. Generally, the quality of the materials used – real stone, real wood, beautifully-textured fabrics – prevents it all from looking like the Haunted House.

By definition, I don’t think you can get a good idea of what it truly feels like just by looking at pictures, since even the films didn’t do that. But here’s a bit of what we saw that day – thanks Zahra for most of the pictures- :

Now what, you also want to know how much I spent that day? Here’s a breakdown:

That’s almost £45, and not counting transport, nor the indispensible glass of Butterbeer, which Zahra treated me to:

So yes, the Warner brothers are doing great, thank you very much. And I’d understand if it bothers you. But really, what a shame it would be to miss this completely disproportionate, extremely well-thought-out, immensely enjoyable look at the secrets of the eight Potter films.