One of the most interesting parts of being an academic, I think, is getting to attend conferences. Until this past week, I had had the pleasure of attending one conference, The Child and the Book, which we hosted here in Cambridge. The winter months brought conferencing lull for me, that is, until this past week, when there was a day-long conference on the Afterlife of Dorothy up in Manchester. Though my present research is less about what the character of Dorothy has been up to since leaving Baum’s The Wonderful Wizard of Oz (1900), my MPhil thesis involved both the book and the 1939 film (that’s the technicolor, Judy Garland version). And so, I strapped on my ruby/silver slippers and went.

I have never been to a conference on my own, and so felt a bit like Dorothy as I traveled from one train to another – “some of it wasn’t very nice, but most of it was beautiful” (that’s a slight exaggeration, but for the sake of the quote, we’ll have to forgive such things). When I arrived in Manchester there were no Munchkins or giant plastic flowers to greet me. The good news is that I didn’t kill or encounter any witches on arrival either!

After a peaceful night’s sleep at the hotel (unfortunately, there were no nearby forest clearings or Munchkin farmers’ cottages to offer me repose), I made my way past a few cornfields and poppy fields to the conference which was being put on by Hic Dragones, a small publishing company, which has close connections to the University of Manchester. 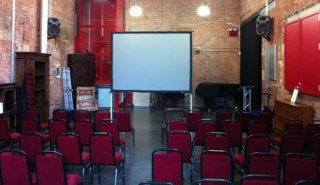 (the Emerald City, also known as the inside of the International Anthony Burgess Foundation)

There I was able to listen to several very interesting papers, including a psychoanalytic reading of The Wizard of Oz (1939) by author Geoff Ryman, which explored how Dorothy’s dream-journey echoed both a desire for her dead parents and the history of the United States at the same time. Ryman peppered his talk with clips from the film which left all of us a bit emotional just in time for the coffee break. Nothing like tea to aid an emotional recovery!

(I bet Dorothy could have used with a cup of tea after this encounter! Image from here)

The subjects of the other papers were as varied as a Queer reading of the musical Wicked (Johanna Schorn), an exploration of Baum’s transmedia storytelling (Matthew Freeman), and a look at feminine madness in Disney’s Return to Oz (1985) (Carys Crossen). I myself gave a paper using space-place theory to determine why the 1939 film stands out as the true American fairy tale over the novel on which it is based. Gregory Maguire, author of The Wicked Years series (1995-2011), even Skyped in to speak to us, resembling the floating head of the Wizard, though much more friendly.

By the time the conference was over, I felt a bit like Dorothy, sad to leave new acquaintances and a new landscape, but realising there’s no place like home. And so I rode a few more trains back, feeling upon arrival like I had “tried to get back for days and days!” But very, very glad for the experience.

Just a little update of the conference! Currently, the conference will go ahead as planned on 11th and 12th September 2020. However, with the situation changing so rapidly, things may change. If there is any indication the conference needs to be rescheduled, we will let you know asap. For this reason, we have been a little slower in getting out information packs and registration fee. We are working on this and will have an update in the coming weeks. This decision is in line with the University’s policy (https://www.cam.ac.uk/coronavirus/18032020-urgent-update-from-the-vice-chancellor-on-the-coronavirus-outbreak) who currently anticipate that we will be out of the “red” phase and able to be open at the beginning of the next academic year.  Until then we ask you all to take very good care of yourselves & to know that we are a close academic family, so please reach out. You aren’t alone in this & we hope this will only make the Children’s Lit and YA community even stronger #YASexy #letstalkaboutsex #yalit #crclc #universityofcambridge @nichilton1 @gabrielduckels @_lisacam
Happy St Patrick’s Day! With everything feeling a little out of control at the moment, it’s good to know we have a place to escape to in a good book. Here are a selection of some wonderful Irish authors in our ever growing collection that can whisk you away! 🇮🇪 (thanks to @edfaclib for buying them and @nichilton1 for her irish author obsession) 🇮🇪 #bookstagram #childrensliterature #yalit #escapeinabook #irish #stpatricksday #crclc #universityofcambridge
Happy International Women’s Day to everyone out there! Here’s a selection of just some of the fabulous female authors that we love. With so many incredible women in the world, we want to say say thank you to you all for being who you are. And if you are feeling tired from just being your amazing selves why not take a little rest with a good book! #iwd2020 #iwd #childrensliterature #yalit #picturebooks #bookstagram #crclc #universityofcambridge #rockingthesystem
Belated post (due to support of current strikes) but Happy World Book Day!! Take a look at just some of the new treats that we’ve had come into the @edfaclib 😍📚😍 what will you be reading this weekend? #jacquelinewilson #chrishaughton #katherinerundell #sheenawilkinson #childrensliterature #yalit #picturebook #crclc #universityofcambridge #bookstagram
Seeing how positively the new edition has been received makes our day! We have past and present members of the centre included in this edition and we are so proud! Well done Morag Styles, @annapurkiss and @susansmtan 📚📚 Posted @withregram • @bookislandbooks Purchased the second edition of ‘Children’s Picturebooks | The Art of Visual Storytelling’ by @profmartinsalisbury and Morag Styles a while ago and have been sharing it with everyone who happens to pop in at Book Island. I’m so impressed with the new content including the interviews with fellow micro and studio publishers, student and professional case studies, …. This is a must-have for everyone who’s passionate about picture books: illustrators, printmakers, authors, publishers, academics, teachers, reviewers… 🧐 ‘Children’s Picturebooks’ features artwork by hundreds of illustrators. Can you spot anyone you know? Feel free to show them your love by tagging them in the comments! 👉 This book is available from any independent bookshop in the UK. ✍ Cover art by @BeatriceAlemagna @professormartinsalisbury #MoragStyles @LaurenceKingPub @cambridge_school_of_art #illustration #illustration #publishing #picturebooks #childrensbooks
The latest article on our blog is now live! In perfect timing for Valentine’s Day, Sapphire Demirsöz (@sapphiredemirsoz), an MPhil student of children’s literature, has written five spring self-care tips, based on the five #lovelanguages! 💕 You can find the article at Cambridgechildrenslit.co.uk 💞 #Cambridge #cambridgeuniversity #selfcare #valentinesday