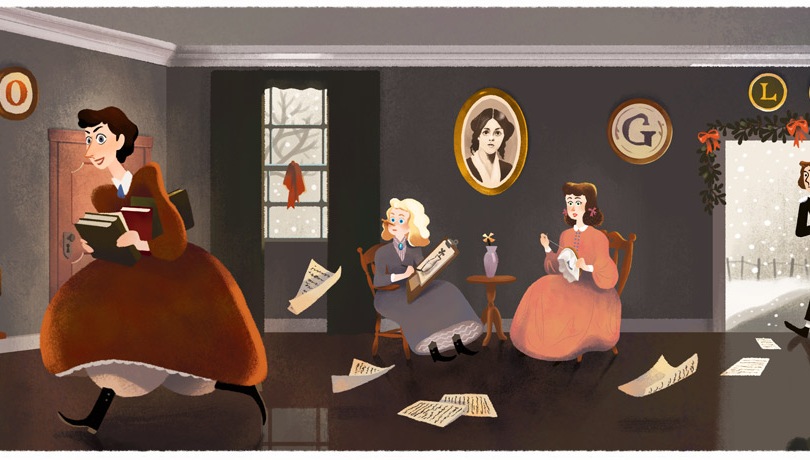 If she’d still been (miraculously) alive, Louisa May Alcott would be turning 184 today. How did I know this? Am I a rabid Alcott-ian? Mad for Jo? Keep Laurie close to my heart always?

Nope. The answer is Google!

Google has snatched Alcott’s 184th birthday out of (more or less) obscurity and celebrated it with its doodle! To quote from the doodle page:

“I like good strong words that mean something,” says Jo March in Little Women. The same could be said of that beloved novel’s author, Louisa May Alcott, who was born on this day in 1832. In addition to being a writer, Alcott was a suffragist, abolitionist, and feminist. She grew up in the company of luminaries like Ralph Waldo Emerson, Nathaniel Hawthorne, and Henry David Thoreau, who fostered in her a strong sense of civic duty. Alcott volunteered as a nurse during the American Civil War, and her family’s home was a station on the Underground Railroad. She was active in the women’s suffrage movement and became the first woman to register to vote in Concord, Massachusetts. Through it all, she wrote novels and short stories tirelessly, sometimes working 14 hours a day.

Today’s Doodle portrays Beth, Jo, Amy, and Meg March, as well as Jo’s best friend Laurie, their neighbor. The March family of Little Women was based on Alcott’s own, and the coltish Jo was Louisa’s vision of herself: strewing manuscript pages in her wake, charging ahead with the courage of her convictions, and cherishing her family above all.

It also seems like an appropriate doodle because, as it is officially post-Thanksgiving, the American in me feels like it’s now okay to have Christmas trees up (both physically and in images). Also, term is ending here in Cambridge, so the blog might be taking a bit of a Christmas break! Posts will potentially be a bit sporadic until January, dear readers, though maybe not – we are academics and therefore we are fickle!

Much love,
a wise old owl