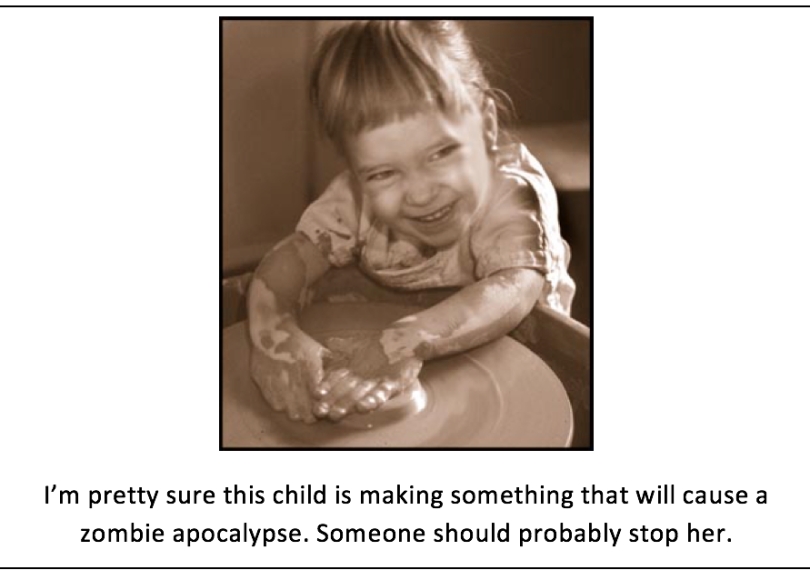 Beka Kimberley chose her undergraduate degree because it had a module in children’s books, which then got cancelled. After twelve years of teaching she’s now studying for the MPhil in children’s literature.

If you haven’t been to the Hide and Seek: Looking for Children in the Past exhibition at the Museum of Archaeology and Anthropology, you have two more weeks to go and see it. It’s one of those easy and free things to do in Cambridge, which is a point in its favour already, and it is next to the Sedgewick museum, which has dinosaurs.

The exhibits aim to reveal something different about childhood, such as the fact that archaeologists interpreting artefacts forget about anyone under the age of 16 surprisingly frequently. What really got me thinking was the artefacts which relate to children and work. Most of my perceptions of children working are deeply negative; small boys being forced down chimneys or working long hours in sweatshops to make money for callous capitalists selling overpriced designer goods. These helpless victims need to be rescued by adults who know better until, like Tom of the Water Babies, they can be born anew in the idealised innocence of romantic childhood.

The Hide and Seek exhibition shows working children in a different light. There are certainly unhappy examples such as the 13-year-old sentenced to prison for theft who had his occupation was listed as ‘labourer.’

Then there are gold threads, a few millimetres across, that were probably created by sharp eyed children whose vision would have been far better than adults. Their sight was likely to have been permanently damaged by the process but archaeologists also believe that such skills would have been accompanied by high social status.

Moving into more positive associations, there are miniature pipes and lathes made by Victorian apprentices who were being paid as they trained, something the UK government has been trying to reinstate with varying amounts of success for decades. Some of these were made in the boys’ leisure time, evidence perhaps that they enjoyed creating new things and took pride in their new found abilities.

My favourite items are a variety of ineptly finished clay pots from family run kilns. They are marked with child-sized fingerprints or decorated with wobbly lines that show exactly the kind of varied pressure and uneven spacing of four year olds learning to write. Having taught many a small child to mush clay into strange shapes, I can’t help but see this as an activity with an element of fun. Putting this child’s work into a family context changes the character for me, away from a poor innocent being exploited, towards children learning something that will contribute to their comfort and success.

In children’s literature, there’s plenty of wish fulfilment style stories in which children do the jobs of adults- the Famous Five and the Hardy Boys investigate crimes, Max is the ruler of the Wild Things, Harry Potter and Katniss Everdeen save the world and Pat Hutchins’ little boy is tasked with getting the weekly shop in Don’t Forget The Bacon. Even Peter Pan, the boy who famously never grew up, captains a pirate ship and project manages the building of a Wendy House.I can think of lots of examples of children who love to be part of ‘grown up’ jobs- the sought after status of who gets to put the straws in the milk bottles at school, my nephew ‘helping’ my brother-in-law replumb a bathroom; the delight I took at doing the washing up at the age of nine (I found out years later that my mother used to do it again after I went to bed).

Of course, these examples are fictional- even the memories I describe are more about playing at being grown up, rather than actual work- and they lack the element of economic necessity and boredom that so many of us find in the 9-5 adult world.

One of the reasons I came back to university- after a frighteningly long break- was to open my mind to new ideas and ways of looking at things and my perception of working children has been challenged. Of course, children all over the world are still being exploited in dangerous and low paid work. Nonetheless, the exhibits at the museum reminded me that for most of the population for most of human history, resources were scarce and it was expected that children contribute to family life- including economically- as much as they could. Society didn’t collapse because of this and people don’t seem to have been irrevocably scarred by entering the economy at a younger age. The recent freedom in affluent countries to spend our early years playing and learning is limited to a privileged few.

(For a serious look at exploitative child labour, look here.)