Danielle Cameron refuses to believe that her second term as an MPhil student is nearing its end. She can often be found loitering around Cambridge Arts Picturehouse and thoroughly recommends their student membership deal (hello two free tickets!).

“But isn’t the book always better than the film?”

Fidelity is an understandable concern when hearing that a book that you’ve read – whether it’s a fave or not – is being adapted for the screen. No one wants their favourite character changed beyond recognition or half the narrative to be garbled into a directionless mess. I, for one, have had varying experiences of watching adaptations.

As I remember it, two of my strongest reactions happened when watching Harry Potter and the Philosopher’s Stone and Stormbreaker (based on the first book of Anthony Horowitz’s Alex Rider series) .  The first shot of Alan Rickman as Severus Snape in The Philosopher’s Stone really did send shivers up my spine. His expression, the framing of him against the stone wall of Hogwarts’ Great Hall… he was just as I’d imagined Snape, albeit with a slightly less hooked nose. A few years later, my stomach dropped when watching Geoffrey Sax’s version of Alex Rider. Gone was the endearing, humourous teenage spy, only to be replaced a bland, Hollywood-style-with-no-substance performance and script. The appeal that I’d found in the Alex Rider series was the humanness and subtlety in Alex’s struggle to balance life as a teenager and life as a spy. The film replaced these subtleties with explosions and flying motorbikes. These films still represent two of my most vivid memories of how adaptations can enchant and disappoint.

However, as I’ve grown older, I’ve come to appreciate that book-to-film adaptations can be approached as a piece of visual art independent to the original text. In reality, when a filmic adaptation is released, we are being invited to experience another reader’s interpretation of a presumably beloved work. Interpretations other than our own offer new ways to appreciate and analyse our own thoughts. Whether we love or hate (or are just plain indifferent to) the interpretation we see on screen, these responses tell us something about what we valued about the original story.

Here are a few of the upcoming adaptations due for release in 2017:

Jay Asher’s 2007 young adult novel cast an unflinching eye at the different roles that individuals can play in someone’s life. 13 Reasons Why tells the story of Hannah Baker through the thirteen cassette tapes she sends to a classmate soon before she takes kills herself. Upon release, Asher’s debut won praise from both Sherman Alexie and John Green. Selena Gomez and her mother are producing the Netflix long-form TV adaptation of the book.

Since its 2015 release, Nicola Yoon’s Everything, Everything has remained popular in YA book displays and charts alike. Eighteen-year-old Madeline Whittier has an immunodeficiency that means

she cannot leave her house. A friendship forms between her and her new neighbour, who makes Madeline reassess what life really means to her. When the announcement was made that Amandla Stenberg was to be cast as Madeline, my interest peaked. While you may mainly know Stenberg as Rue from The Hunger Games, she has since become a leading youth activist and carefully selects the roles that she takes on. 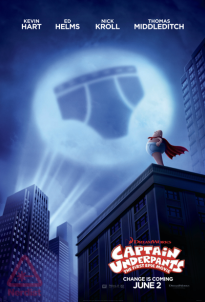 Yes, that’s right – Captain Underpants is coming to the big screen. Produced by DreamWorks Animation, the film has been five years in the making! This 3D computer animated version of Dav Pilkey’s hugely popular work has some great voice actors on board: the cast includes Kevin Hart, Ed Helms and Jordan Peele. 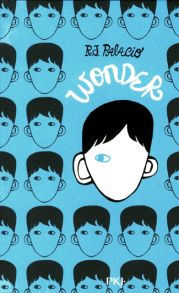 Jacob Tremblay, Julia Roberts and Owen Wilson are cast as the Pullman family in the Stephen Chbosky-directed adaptation of R.J. Palacio’s book. Tremblay plays Auggie Pullman, a young boy with a facial deformity who strives to fit inat a new school and show his peers that they should not define others based on their physical appearance. It’s exciting to note that this will be Chbosky’s first release as director since The Perks of Being a Wallflower (which he also wrote).

Just a final note, if you haven’t yet checked out Netflix’s A Series of Unfortunate Events please do so! Also, in case you haven’t seen the publicity yet, the live-action adaptation of Beauty and the Beast will be out on 17 March. Fingers crossed it’s a good’un.

Regardless of what you choose to see, happy watching!