Beka Kimberley is an MPhil student in Children’s Literature, which is a wonderful thing to be.

It is the greatest sadness of my adult life that I have not yet acquired a cat of my own.  I didn’t have many childhood ambitions but cat ownership was definitely among them (also being a part time poet and a part time school dinner lady, because I was aware that poets don’t make a lot of money and I liked the aprons the dinner ladies wore). Maybe I should have worked harder on buying a house in my 30s, like all my friends instead of becoming a student again and renting a top floor flat… As things stand, however, I have to get my cat owning thrills vicariously: visiting them at other people’s houses, conducting internet meme searches admiring the pleasing number of lectures on the children’s literature MPhil course that have included gratuitous feline pictures,  and the ever-fertile ground of children’s literature. Here are a few of my award winners in each cat-egory (sorry, I couldn’t resist).

Long before Maru was born or anyone outside of an elite group of software engineers had even heard of the internet, I was a bright-eyed teenager on work experience in a local primary school. The book the children were studying was, My Cat Likes To Hide In Boxes by Eve Sutton and Lynley Dodd. Full of flamboyant cats with hobbies which all conveniently rhyme with their country of origin, the real standout of the piece is the eponymous yet oxymoronically unnamed cat. He likes to hide in boxes. Great catting style 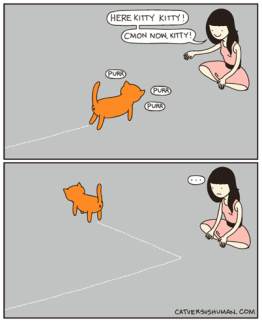 In my opinion, there is an overrepresentation of dogs as companions in children’s literature. I come down very firmly on the feline side of the cat/dog divide. So my – perhaps slightly offbeat – choice from Alice in Wonderland is not the Cheshire cat, but Alice’s own kitty, Dinah. From the very start of her adventure, Dinah is on Alice’s mind, so much so that she can’t help but bring her up inappropriately in conversation with mice, birds and other bite-size creatures. She is concerned about missing Dinah’s tea time and longs for her company. The relationship does seem one-sided, as when Dinah makes an actual appearance in Through The Looking Glass, she shows almost no interest in Alice whatsoever. However, that is something that cat lovers have long since accepted as inevitable, at least some of the time.

(Honourable mention: the hapless and long-suffering Mog in the Judith Kerr books who sticks by her family until her rather beautiful departure in Goodbye Mog.)

What’s a children’s literature blog without a reference to Harry Potter? Undoubtedly, the real hero of the piece is Crookshanks. It would be tempting to suggest that he was a noble, intelligent animal who intuitively recognised Scabbers for the treacherous and dishonourable criminal he was. Probably, though, he just liked chasing small creatures. Some cats are like that. Normally the ones who are owned by vegans, who liked the thought of sharing their home with a beautiful furry living being but are horrified with the prospect of picking up tiny molested corpses every morning. If you actually bought a cat to deal with a mouse problem it’s fairly likely that you’ll end up with one who couldn’t care less. 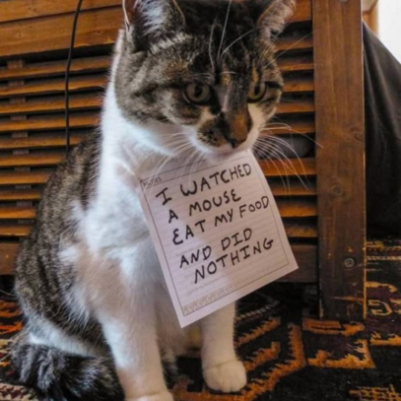 (Honourable Mention: Tom Plus of Dick King Smith‘s The Mouse Butcher. Admittedly, I haven’t read this in years but I remember it as a slightly strange yet engaging little tale of class warfare, starcrossed lovers and the expertise of main character in catching mice.)

The (rather ironically) unnamed subject of TS Eliot’s “Th 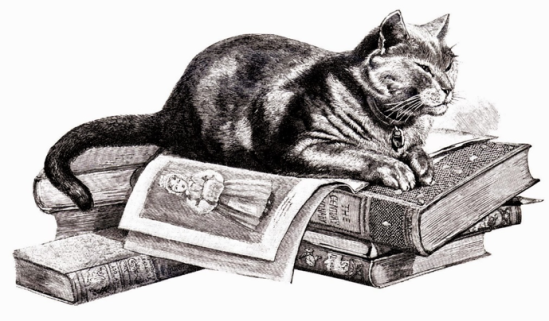 e Naming of Cats”. Old Possum’s Book of Practical Cats was one of my childhood favourites. I was so happy when this appeared on our weekly reading list last term! Every poem in it is brilliant, and recognisably catlike but I’ve chosen the opening poem in which Elliott solves the problem of what exactly is going through a cat’s head when he stares into space for apparently no reason.

His ineffable effable
Effanineffable
Deep and inscrutable singular Name.
So now you know.

Six Dinner Sid there is a cautionary tale in the subplot of this book, which is about community cohesion and how neighbours should speak to each other more often. It’s also about how Sid dupes an entire neighbourhood into feeding him multiple times a day, only to regret his deception when he ends up being taken to the vet for the same illness six times. What could have been a tragic tale of over medication fortunately ends with Sid abandoning all six families who previously looked after him and finding another street where he can ridiculously overeat to his heart’s content. Heartwarming stuff. Primary school teachers: you can do a lovely story sack/piece of drama with this book, which is particularly satisfying if the number of children in your class divides exactly by six.

(Honourable mention: Garfield, who I have mostly included for nostalgic purposes. Although apparently, you shouldn’t give your cat lasagne if it contains garlic, mushrooms or onions.)