Anna Purkiss is an MPhil student who is currently writing her thesis on representations of disability in contemporary young adult fiction.

During a cake and coffee break in the midst of thesis writing the other day, myself and some fellow children’s literature MPhil students were reflecting on this year and how quickly it has gone, which led to me thinking about how much I have changed. It is no exaggeration to say I cannot remember another year in my life in which I have changed so much; from my thinking being challenged and widened on so many different issues and the sheer amount I have learned, to my increased confidence and the way I am finally happy to be a glasses wearer!

Change and transformation are important themes of children’s literature, reflecting the rapid changes happening in its readers’ lives, minds and bodies. When I was a primary school teacher, I often marvelled at how much the children had grown, even after just a week’s half term holiday, and was privileged to witness their learning, thinking and personalities developing. Changes in lives and attitudes are nearly always present in children’s literature texts, often inherent to their plot and character development, but major physical transformations are at once more obvious and less common, and so I will focus on these today.

We have just come to the end of May Week here in Cambridge (despite it being June!) and so the change of appearance that immediately comes to my mind is when Cinderella is transformed by her fairy godmother so that she can go to the ball at the palace.

The godmother had only to touch her with her ring and Cinderella’s workaday overalls and apron changed into a dress of cloth of gold and silver, embroidered with precious stones. Then she gave her the prettiest pair of glass slippers. (Perrault)

The fact that Cinderella’s step-sisters do not recognise her at the ball acts as a commentary on the power of clothing, especially as her extraordinary beauty is previously described as undiminished by her rags. Significantly, her personality and character have not needed any alteration. Although this superficial transformation is temporary, as it famously reverts at midnight, it leads to a permanent change in Cinderella’s life. 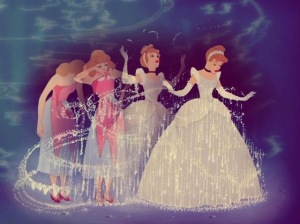 Apparently, the transformation scene in the Disney animation of Cinderella (1950) was Walt Disney’s favourite piece of animation, and indeed transformations take place in many Disney films for varying reasons, as well as in the fairy tales that so many of them are based on. For example, in Beauty and the Beast (1991/2017), the Prince’s transformation into the Beast is a curse due to his arrogance, only broken after his character has changed considerably and Belle confesses her love for him. By contrast, the Queen becomes an old hag in Snow White and the Seven Dwarves (1937) in order to poison Snow White, while Ursula satisfies Ariel’s wish to be a human for her own nefarious means in The Little Mermaid (1989).

All of these fantastical transformations necessarily involve magic, which of course is also the case in the Harry Potter series by J.K. Rowling. As well as transfiguration, which changes the appearance or form of an animal, object or person, the notoriously difficult to make Polyjuice Potion is used to temporarily turn characters into different people on several occasions. It is first mentioned in Harry Potter and the Chamber of Secrets (1998), when the trio turn into Crabbe, Goyle and, accidentally and incompletely in Hermoine’s case, Millicent Bulstrode’s cat, in order to investigate Draco Malfoy. Rowling provides a detailed description of this process, and unlike those in Disney animations, which are painless and usually accompanied by sparkling fairy dust, these transformations are far from pleasant.

Immediately his insides started writhing as though he’d just swallowed live snakes – doubled up, he wondered whether he was going to be sick – then a burning sensation spread rapidly from his stomach to the very ends of his fingers and toes. Next, bringing him gasping to all fours, came a horrible melting feeling, as the skin all over his body bubbled like hot wax. (p.162)

As only their outward appearances change as a result of the Potion, Ron and Harry also have to employ changes of clothes and some rudimentary acting skills in order to pull off the deception. While they find out nothing of consequence for their troubles on this occasion, Polyjuice Potion plays a much more vital role in Harry Potter and Deathly Hallows (2007), as it is used to safely transport Harry from Privet Drive, disguise him at Bill and Fleur’s wedding, and break into both the Ministry of Magic and Gringotts Bank. 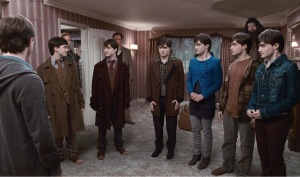 While the Potion is taken on all of these occasions to try to defeat Voldemort, it is also used by one of his supporters, Barty Crouch, in Harry Potter and the Goblet of Fire (2000) when he kidnaps and then impersonates the Auror Mad-Eye Moody for the whole school year. As with previously mentioned transformations, the effects of the Polyjuice Potion are temporary and so Crouch is only able to remain changed for so long because constantly drinks it, keeping Moody captive in order to remake it as needed.

Other notable and dramatic transformations, such as Eustace turning into a dragon in The Voyage of the Dawn Treader by C.S. Lewis (1952); Bella finally becoming a vampire in Breaking Dawn (2008); and Fiona permanently staying an ogre instead of the expected princess in DreamWorks Animation’s Shrek (2001), all continue the pattern of major physical change as a result of magic or the supernatural. However, a much loved picturebook which breaks this trend is The Very Hungry Caterpillar by Eric Carle (1969). The eponymous caterpillar, who is tiny at the start of the book, develops an ever-increasing appetite, devouring a huge amount and wide range of food before eventually turning into a chrysalis and then a beautiful butterfly. The colourful and appealing illustrations combine with simple but descriptive text and ingenious finger-sized holes, signalling the caterpillar’s path, to introduce young children to the amazing transformations that occur in nature, which, in the spirit of Frances Hodgson Burnett’s The Secret Garden (1911), could even be considered a form of ‘magic’ itself. 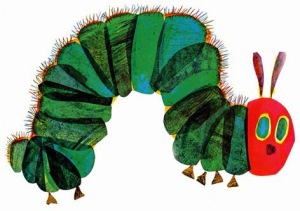