It is snowing as I am writing this here in Cambridge, so I am humming ‘I’m Dreaming of a White Christmas’ and feeling very Christmassy! It seems appropriate then to talk about another sure (and these days much more reliable) sign that Christmas is approaching. Over the past few years, Christmas adverts for some department stores and supermarkets have developed into miniature films that are unlike traditional adverts filled with product placements but rather stories that highlight sentiments and morals connected with ‘the meaning of Christmas’, and several have used characters from children’s literature.

Two years ago, Judith Kerr wrote a brand-new story about her beloved character, Mog the cat, for the 2015 Sainsbury’s Christmas advert. Mog first appeared forty years previously in Mog the Forgetful Cat (1975) and had actually died in Goodbye Mog (2002), so her return was quite the surprise. Mog’s Christmas Calamity  includes a CGI Mog and a cameo appearance from Judith Kerr herself (2:23 – 2:30). Mog accidentally ruins the Thomas family’s Christmas: her tail twitching due to a bad dream sets off a train of events which leads to a burnt turkey, needle-less Christmas tree and ruined house. Luckily, she also accidentally rings the fire service and so saves the day. The story ends with their neighbours rallying round and making sure the Thomas family have a Christmas after all. This is very much in line with Kerr’s previous Mog stories, particularly the first in which Mog is always getting into trouble for being forgetful, but then saves the day when her forgetfulness helps to apprehend a burglar. I was teaching at the time this advert was released, and used both the advert and tie-in picturebook (written and illustrated by Kerr) as the basis for my Key Stage 1 class’s English unit leading up to Christmas. 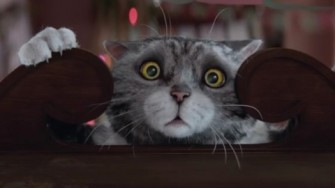 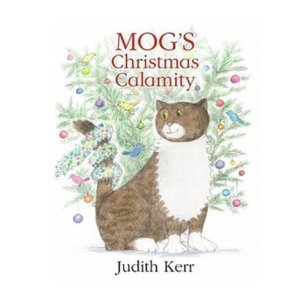 This year, Michael Bond’s cherished character of Paddington Bear stars in Marks and Spencer’s Christmas advert, to tie in with the release of the film Paddington 2. Bond first revealed Paddington in A Bear Called Paddington (1958), and this bear from deepest, darkest Peru has since appeared in over 150 books, several television series and two films. Paddington & the Christmas Visitor sees Paddington mistake a thief for Santa Claus and consequently help him to return the gifts he has stolen to their rightful owners along the street. After seeing the children happily opening their presents and receiving one of Paddington’s marmalade sandwiches himself, the burglar appears to be reformed, and thanks Paddington. The style and aesthetic are very recognisable from the two recent Paddington films (2014; 2017), as are the many instances of gentle humour, particularly the sequence with the sleigh (0:40-0:56). Paddington’s trusting, optimistic and kind nature as seen in this advert are also in keeping with the films as well as Bond’s many books.

Both adverts are beautifully made with high production values, involving live action in combination with CGI main characters; necessary when dealing with animals who have been anthropomorphised to differing degrees. They also have tie-in picturebooks with proceeds going to charity (Save the Children and NSPCC’s Childline respectively), while the taglines of ‘Christmas is for sharing’ (Sainsbury’s) and ‘This Christmas, let’s spend it well’ (Marks and Spencer) also foster a sense of Christmas goodwill. However, this emphasis is somewhat tempered by the range of tie-in goods available to buy in store. While Sainsbury’s only produced a plush toy Mog in connection to Mog’s Christmas Calamity (interestingly, this sold out quickly and was then available for ten times the price on Ebay!), Paddington & the Christmas Visitor is linked to 35 products in Marks and Spencer’s ‘The Paddington Shop’, including the ‘Super Alice’ costume featured in the advert. Interestingly, Paddington is also used to market Robertson’s Golden Shred marmalade, reflecting Paddington’s love of marmalade sandwiches, and showing that he is no stranger to the world of advertising!

It is therefore easy to be cynical about the purpose of such adverts and their associated products, with good reason. However, these short films are also very enjoyable, and are largely keeping with the original books and characters, particularly Mog’s Christmas Calamity, which was made with the full collaboration of the author. This is not always the case though; John Lewis has come under fire this year for the significant similarities between their advert, Moz the Monster, and former Children’s Laureate Chris Riddell’s picturebook, Mr Underbed (1986). This has had the unexpected but happy consequence of Mr Underbed selling out, and 10,000 more copies being printed. Riddell has said, “I think this has sent a powerful message to John Lewis who I hope will work more directly with picture book authors in the future.” [i] 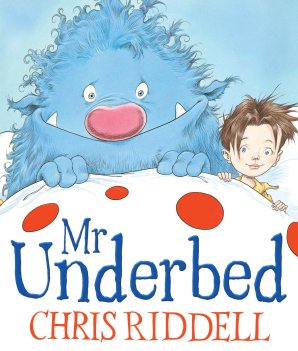 Why then is children’s literature increasingly being drawn upon for such adverts? Even when specific characters are not used, many adverts are clearly inspired by themes and styles found in children’s literature. For instance, this year’s Debenhams advert, #YouShall Find Your Fairytale, is a modern-day version of Cinderella, while John Lewis’ The Bear and The Hare (2013) has links to both Aesop’s fables and Disney animation. Perhaps this is due to the strong link between childhood and Christmas, as well as a sense of nostalgia: Mog and Paddington are as, if not more so, familiar to the parents of children today as to the children themselves. It will be interesting to see if this trend for short films inspired by children’s literature continues to develop in the Christmas adverts next year.