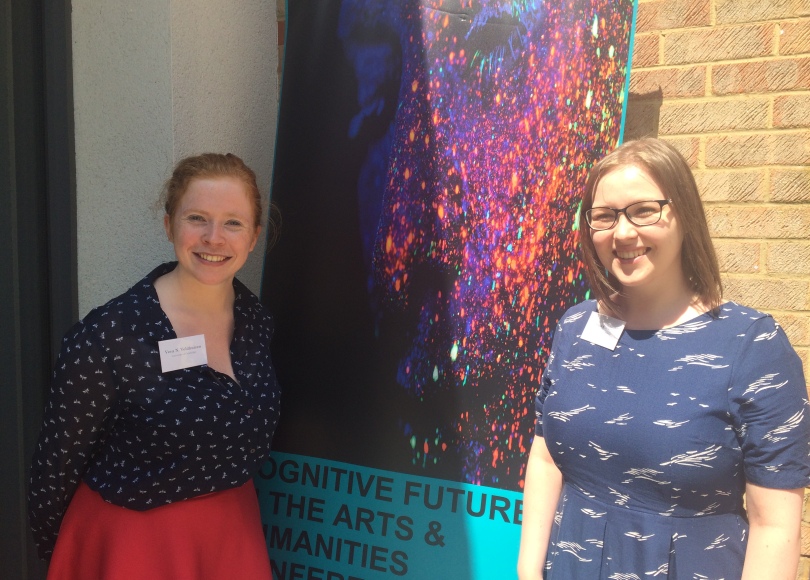 Anna Purkiss is a first-year PhD student at the Centre for Research in Children’s Literature at Cambridge. Her empirical research looks at young readers’ responses to representations of disability in contemporary children’s fiction.

Last week, along with two of my fellow PhD students, Vera Veldhuizen and Anna Savoie, I traveled to Canterbury to attend a four-day international conference at the University of Kent: “Cognitive Futures in the Arts and Humanities”. The aim of this interdisciplinary conference was to foster dialogue between the arts, humanities and cognitive sciences, considering how findings from neuroscience can influence our understanding and analysis of literature, art, music, artefacts, dance, drama and film.

In terms of this approach to children’s literature, as Katy Day succinctly explained in her excellent blog post, ‘cognitive narratology studies the idea that the brain affects how we read fiction, and the fiction we read changes our brains’ (Day, 2018, para.3). This was the first conference I have attended that was not focused solely on children’s literature, and it was the biggest that I have participated in so far, with 154 papers across 54 panels from contributors from around the world. As there is no way I can give a full account of all the talks in this blog post, I will share a few personal highlights.

The first was the panel given by Ellen Spolsky (University of Bar-Ilan) and Lisa Zunshine (University of Kentucky) who were (quite rightly!) introduced as two of the most influential scholars in the field. Spolsky’s paper was steeped in complicated theory, but it deftly explored and presented her ideas through an analysis of 16th century revenge tragedies. She examined how Theory of Mind, ‘our ability to explain people’s behaviour in terms of their thoughts, feelings, beliefs and desires’ (Zunshine, 2006, p.6*), is a description of the brain dealing with uncertainty about things it needs to know at a psychological level. In contrast, predictive processing hypothesis (PPH), which describes how neurological systems work to keep our bodies alive, is working at a neurological level.  On the other hand, social contracts, agreements which enable a community to work efficiently, function at a socio-political level. She argued that all three of these combined prompt us to pay attention to ‘news’ (which includes fiction) so we can act for our own self-preservation.

Meanwhile, Zunshine discussed the fantasy we have that people’s involuntary body language can betray their innermost feelings: embodied transparency. She illustrated this through looking at several paintings (Soap Bubbles by Jean-Baptiste-Simeon-Chardin; Portrait of a Young Man with a Green Book by Giovanni Cariani) and Shakespeare’s Measure for Measure. I found the idea of sadistic benefactors, who force others into revealing their feelings through body language while sincerely believing they are doing something good, to be particularly interesting. Another fascinating idea is the assumption that when someone is in the audience of a play, they let their guard down because they assume that no-one is watching them. Zunshine concluded by arguing that embodied transparency does not exist in real life (excluding particularly socially impoverished situations), but it’s used significantly in fiction.

Soap Bubbles by Jean-Baptiste-Simeon-Chardin; Portrait of a Young Man with a Green Book by Giovanni Cariani

Of particular interest for my research was a paper given by Rose Turner (Kingston University). She examined how, rather than being a single entity, empathy is in fact a multidimensional skillset. Existing research on the connection between empathy and reading fiction, however, has only looked at a few of these skills. She also explored how reading experiences differ between genre and medium, and argued that it is unlikely that the relationship between fiction and empathy is wholly contingent on the reading process, as non-fiction readers score lower on self-reported empathic traits. Turner’s preliminary findings suggest that different genres are associated with different empathic abilities. Interestingly, comedy was associated with all empathic traits measured, which makes sense, considering the complex nature of comedic narratives. This indicates that both the medium and empathic content are important. I will be very interested to follow the progress of this study and Turner’s research, which made me consider how quantitative studies could support my own qualitative research.

There is so much more I could write about: from a fascinating keynote by Eric Clarke (University of Oxford) on the role of music in encouraging intergroup empathy to my experiences chairing a panel on physical and cognitive artefacts. However, I will conclude with some reflections on the role of children’s literature in this conference.

Over the course of the four days, there were papers on Peter Pan, and the implications of reading consciousness research for child readers, along with the panel in which Vera, Anna and I presented on ‘Opportunities for Empathy in Representations of Conflict and Minorities in Young Adult Fiction’. Although our panel was only attended by our lovely chair and another helper, this can be attributed at least in part to the six other panels taking place at the same time, and to our newness to the field. Everyone I spoke to was very interested in my doctoral research. All of this suggests that the wider field of cognitive approaches is beginning to recognise the value of considering child readers and children’s literature.

Indeed, my experience at this conference is testament to the value of cognitive approaches to children’s literature and the wider cognitive approaches field interacting with each other. Not only did I meet and make valuable connections with scholars in many fascinating areas of study, but the panels I attended and discussions I had have clarified how I will be using cognitive approaches in my own research. Our own 4th Cambridge Symposium on Cognitive Approaches to Children’s Literature the next day emphasised this, with highly esteemed scholars, who usually use cognitive poetics to analyse general literature, referring to examples from children’s literature such as The Hunger Games and The Gruffalo in their papers. I very much hope that this crossover and collaboration will continue in the future.

* Zunshine, L. (2006). Why We Read Fiction: Theory of Mind and the Novel. Columbus, OH: The Ohio State University Press.