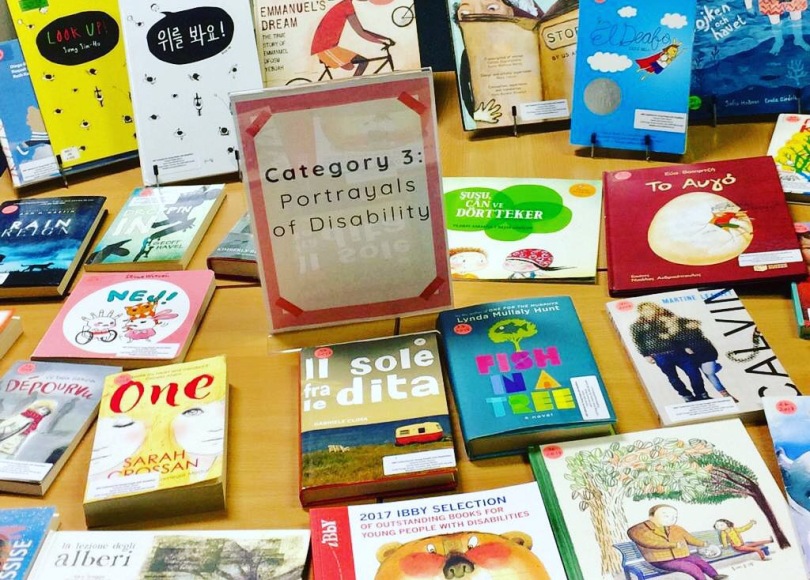 Carrie Spencer is a CRCLC first-year PhD student who’s researching how the portrayal of mentally disabled mothers in young adult literature disrupt expected gender roles in fictional families. Carrie finds her own expectations continually disrupted by her daughter, who wonders if she can drive a racing car in a tu-tu.

This week, the Homerton College library was honoured to be part of an event that only happens once every two years: the worldwide tour of the international selection of outstanding books for young people with disabilities selected by IBBY (the International Board on Books for Young People). These fifty books, from picturebooks to young adult novels, in many different languages are selected as part of IBBY’s ongoing project to identify and encourage the publication of books specifically designed for young people with disabilities.

The first category in the selection is specialised format books that can help make reading accessible to everyone. These 11 books include tactile picturebooks which make use of a range of materials to create different sensations of sound and texture, as well as contrasts between colour and size, background and foreground. Some are made entirely from cloth, such as the Japanese book Kon-Kon Kushan no Uta (Cough-cough, sneeze!) by the Mokomoko Group, design by Mitsuyo Noguschi, 2016, which features a range of animals alongside a well-known song about masks, which the children can select and place on each animal. A number of other texts, from the Netherlands, Iran and the UK, include both braille and tactile materials to distinguish between characters through the story. At our event accompanying the collection’s visit to Homerton College library, we gave attendees the opportunity to have a go at turning spreads from popular picturebooks tactile using craft materials.

Some specialized format books are similar to standard hardback picturebooks with different textures relating to images depicted. Some use cut-outs and flaps. There is fiction and non-fiction in the selection and both are produced beautifully. One personal favourite is Des signes et moi (Signs and me, Cendrine Genin [text] and Séverine Thévenet [ill.], 2015) which shows children making signs for words on one side of the spread with a photograph of the object on the opposite site. This category also includes an example of dyslexic-friendly font in the Italian action filled story Superheroes’ rest home (La Casa Di Riposa Dei Supereroi) by Davide CalÌ (text and ill.), 2016. This wonderful range of specialized format books intertwines the careful application of knowledge of different disabilities with creative talent.

This thoughtful design that makes reading a pleasure regardless of (dis)ability extends to the 14 illustrated books in the IBBY category of universal access. Universal access books are part of mainstream production but designed to be understandable to everyone, particularly young people with learning, intellectual or developmental disabilities. Some of these books are part of mainstream publishing but with extra care and attention paid to high contrast colours, simple shapes and the way in which the flaps and cut-outs inform the text to make them universally accessible. My particular favourite is the French opposites bookLes chiens (contraires) (The dogs [opposites]) by Élo (text), 2016, featuring bold colours and polka dot dogs. Moving the flaps reveals words for the ways in which the dogs have changed. For example, the dog sits on the table with the word for ‘over’ and then the flap lifts to cover that dog and reveal another one under the table with the word for ‘under’. It is ridiculously charming. In a similar way to how these books inform readers about opposites or shapes, the mesmerising Spanish wordless picturebook (pictured) Aurretik ondoren (Before after) by Anne-margot Ramstein (text) and Matthias Aregui (ill.), 2014 shows situations before and after. In a standard hardback format, this book contains extremely detailed illustrations which invite the eye to linger as the reader considers, for example, the sky and mountains surrounding the figure ice-fishing in winter then bobbing in a boat in the summer. Universal access includes a range of wordless picturebooks and those with written text from Lebanon, Korea, Japan, Spain, Argentina and Sweden. The illustrations are as varied as their subject matter, which ranges from how to cook, coping with the death of a loved one, to animals picking their noses, and I cannot do justice to them all!

Just as important as access to books for children with specific needs and disabilities are books about children and young people with disabilities. The IBBY selection’s third and largest category contains 25 fiction and non-fiction books from around the world which portray child and teenage characters with a range of disabilities. Some are familiar mainstream novels, for example, Sarah Crossan’s YA novel Oneabout conjoined sixteen-year-old twins, which won the UK’s CILIP Carnegie Medal in 2016. A number of the books present child and teen characters who are blind or visually impaired, such as the Russian picturebook Nevidimyj slon (The invisible elephant) by Anna Anisimova (text) and Diana Lapshina (ill.), 2013; or deaf, for example, the American graphic novel by Cece Bell El Deafo, 2014. There are a number of picturebooks, middle-grade and YA novels that portray characters who use a wheelchair, including the Korean picturebook by Jin Ho Jung (text and ill) Wireul bwayo! (Look up!), 2014, which we were able to display alongside the English language version which we hold in Homerton Library. The physical disabilities portrayed include characters who were born with or developed a disability such as in the picturebook narration of the real-life story of a boy from Ghana born with a deformed leg Emmanuel’s Dream: The True Story of Emmanuel Ofosu Yeboah by Ann Laurie Thompson (text) and Sean Qualls (ill.), 2015. A number of cognitive disabilities are portrayed too, such as in the Canadian novel Dépourvu (Deprived) by Victoria Grondin, 2016, in which the narrator is the only person in a society where everyone else has Autism Spectrum Disorder.

The IBBY selection in this category – which is by no means exhaustive – considers representation in terms of how differently-abled characters are portrayed, emphasising the importance of presenting children and young people with disabilities with characters and a community they can identify with, which helps to build a sense of identity. PhD students Anna Purkiss (University of Cambridge) and Fox Benwell (Anglia Ruskin University) presented their research on disability in children’s literature, giving an overview of both the academic field and primary texts available, with time for questions and discussion afterwards. After our event and exhibition, Amy (MEd student) commented that “The talks by Anna and Fox outlined the inclusive research being done with disabled young people and left us with hope for an emerging body of work featuring more nuanced presentations of young people with disabilities”.

The representation of characters who are adventurous, compassionate, intelligent, stroppy and complicated regardless of ability is important for all children and young people, supporting a shift towards relationships and away from separation and stereotyping. As Chloe (MPhil student) commented, “It was excellent to attend an event that spoke to and about issues surrounding the representation of disability and the need for accessibility in children’s literature in such a thoughtful manner!”. Karen (MPhil student) also commented, “I was fascinated by the books from around the world. The explanations about why they were endorsed as outstanding examples (of disability representation) were thought-provoking and insightful”. As the collection moves on its journey around the world, we were fortunate to have participated in bringing outstanding books for young people with disabilities to a wider audience.