Victoria Mullins is a current 1st year PhD student in Children’s Literature.She wrote this post when she was on the MPhil course in June 2017. She is still appreciative and would like to say a big thank you to her children’s literature friends who gave suggestions for this blog post!

“We’re all born naked and the rest is drag.”

Such is the wisdom of drag icon (and Emmy Award-winning host) RuPaul Charles.Whilst getting dressed in the morning might seem a mundane task, clothing is charged with great symbolic power. As Victoria Flanagan explains in the introduction to her book Into the Closet: Cross-Dressing and the Gendered Body in Children’s Literature and Film (2007): ‘Clothing is a potent cultural symbol of gender and sexual difference, and the wearing of clothes deemed socially appropriate for the opposite sex is generally considered to be a transgressive and provocative act.’ If we have learnt anything from the study of children’s literature, it’s that the genre is overflowing with examples of transgressive and provocative acts. To give a child a strong voice is to transgress generational boundaries. To go on exciting adventures is to enter lands or cultures that transgress our societal customs. To write a book that might make a child (or adult) reader question the world around them is itself a provocative act. As Kimberly Reynolds tells us, ‘children’s literature is replete with radical potential.’ A genre defined entirely by the age of its intended readership, children’s literature serves a pedagogical function, introducing children to an array of socio-political issues in a digestible form. As such, children’s literature can construct or challenge societal norms.

Children’s literature provides several examples of female-to-male cross-dressing that successfully deconstructs the barriers between female characters and typically “masculine” attributes. If the stereotypical notion of a hero is that of a physically strong, often armour-wearing and weapon-wielding, individual, we can find several female characters in children’s and YA literature that fit such a description. To take a few examples from those given by my lovely children’s literature friends:

Whilst male protagonists tend to dominate children’s fiction, there are several books (such as the ones named above) that present girls that are just as good as, if not better than, their male counterparts in stereotypically masculine pursuits. Cross-dressing is the means through which such characters can showcase their talents, undermining the societal constraints that push girls towards stereotypically feminine, and often domestic, pastimes. 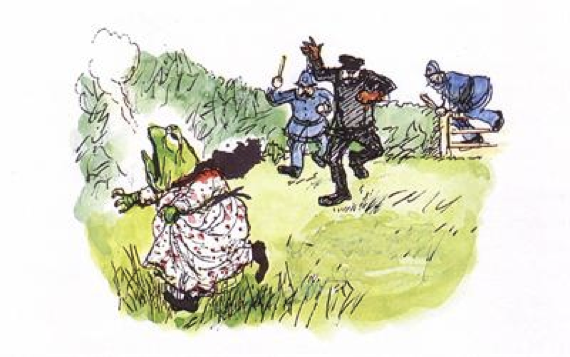 The Wind in the Willows (1908) by Kenneth Grahame

Mr. Toad, a selfish and foolish character, provides comic relief throughout Grahame’s classic with his various (often, motor-related) exploits. Although he is extremely wealthy, he soon finds that he is not above the law as he lands himself in prison for car theft. In order to escape, he borrows the clothes of a Washerwoman who, as her niece tells him, is alike Toad in many ways – particularly in figure. Serving as both a plot-device and a source of comedy, Toad’s cross-dressing not only enables him to return to his friends to reclaim Toad Hall, but it also lands him in some humorous situations. In short, although Toad is able to pass for a woman, he is by no means able to play the role convincingly. Further, as Toad is an animal character, his cross-dressing strikes me as less “radical” than if he were human.

Illustrated by the amazing Quentin Blake, The Boy in the Dress is David Walliams’ first children’s book. Before becoming a children’s author and Britain’s Got Talent judge, Walliams was best known for his comedy sketch show with Matt Lucas, Little Britain (2003-2006). Two of the recurring characters featured in the show were men who, dressed in outfits befitting 19th century ladies, would consistently fail to convince anyone they were in fact ladies. Their sketches would always feature the over enunciated catchphrase: “I am a lady.” So, knowing Walliams’ background, you might expect The Boy in the Dress to be overly comic and self-promoting. And…it is (there is even an allusion to Little Britain in there). However, for all the over-the-top comedy that is stylistic to Walliams as both a children’s author and comedian, he does a lot to present 12-year-old Dennis’ enjoyment of fashion magazines and women’s clothes in a normal light. Dennis liking Vogue doesn’t stop him from being the star player of his school’s football team! Although his writing style is perhaps a little on the nose, I think Walliams does well to use his celebrity status to introduce children to the idea that you aren’t defined by the clothes you wear. The BBC even made a TV adaptation of the book in 2014.

The Shrek franchise is built upon the mocking of fairy-tale conventions, whilst still very much conforming to said conventions. As such, it is rich with comedic references to fairy tales and their adaptations. So, given that pantomime adaptations of Cinderella seem to have always been popular, it seems fitting that it depicts the ugly stepsister as extremely masculine pantomime dame. (For me, it is the cross-dressing wolf that really steals the show. He has a sassy attitude and serves some serious grandmother realness).

Unlike its filmic predecessor, the musical adaptation of Matilda employs a male actor to play Miss Trunchbull. In the style of the pantomime dame, the grotesque mode that Dahl uses to describe the character is translated into a deliberately unconvincing female performance. To continue the adaptations of Dahl thread: although witches are, according to Dahl, an exclusively female species, if you pause The Witches (Warner Bros., 1990) on the conference scene, you will soon discover that many of them are in fact men. 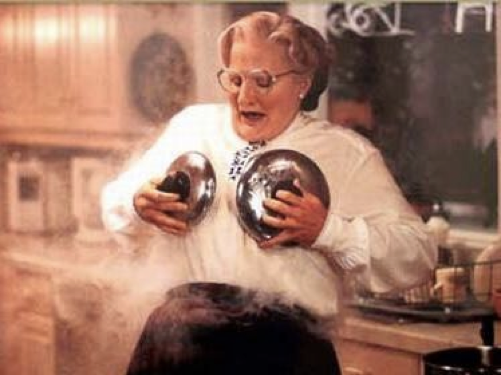 Although Mrs Doubtfire (based on Anne Fine’s 1987 YA novel of the same name) is a comedy that undoubtedly maintains conservative values, I think it is one of the better depictions of drag to be found in a children’s text/family film (it’s rated 12A). I think its success lies not only in Robin Williams’ humour, but also in his ability to deliver a convincing portrayal of female impersonation. By the very nature of the thing, Mrs Doubtfire has to be believable so that Daniel might spend time with his children without his ex-wife, Miranda, knowing. And, although the judge presiding over the couple’s custody hearing refers to Daniel’s behaviour as “peculiar and potentially harmful,” the performative element of Daniel’s female impersonation is emphasised by his career as actor. The performative nature of Mrs. Doubtfire is highlighted further as, in the concluding sequence, the children are watching Mrs. Doubtfire on the TV as the host of a Mr. Roger-esque show.

Animation seems a more adept medium for the inclusion of male-to-female cross-dressing: it features (admittedly, at brief intervals) in Mulan, The Lion King, The Huntchback of Notre Dame, and Aladdin, to name a few classics from the Disney Renaissance period (1989-1999). It is in Lilo & Stitch, however, that Disney’s use of drag is most fully realised. Throughout the franchise, Pleakley (an alien) embraces an array of fabulous and feminine looks. As Pleakley is an alien, his wigs and clothes are part of a disguise, even if he does enjoy embracing his feminine side. Further, Pleakley’s status as an alien, brought up with entirely different societal customs, means he is able to dress as a woman without transgressing normative boundaries (a mantle that adult cartoon American Dad seems to have taken up in its character of Roger Smith, an alien who adopts a different persona – both male and female – each episode). As Pleakley has green skin and one eye, it is safe to say that he does not make for a very convincing female – or, human – character, and his cross-dressing is thus employed for comedic effect. 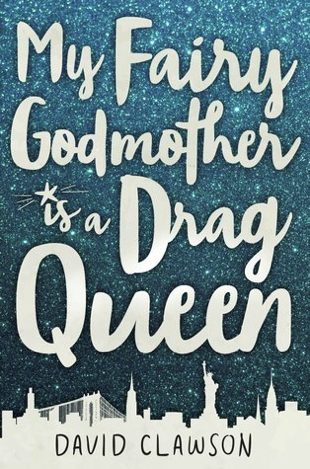 My Fairy Godmother Is a Drag Queen (August, 2017) by David Clawson

This book isn’t out in the UK yet, but I’m super excited about it. So, I thought I’d include a section of the synopsis found on both goodreads and Amazon:

My Fairy Godmother is a Drag Queen is a Cinderella retelling for the modern reader. The novel expertly balances issues like sexuality, family and financial troubles, and self-discovery with more lighthearted moments like how one rogue shoe can launch a secret, whirlwind romance and a chance meeting with a drag queen can spark magic and light in a once dark reality.

Having looked at how children’s texts use drag, I would like to briefly turn to how drag uses children’s literature. Specifically, I want to introduce you (if you aren’t already acquainted) to the work of Todrick Hall. Previous star of Broadway’s Kinky Boots and a judge on RuPaul’s Drag Race, Todrick Hall is both an accomplished drag queen and YouTube sensation. Most of his videos are parodies of Disney films, often combining them with the music of popular female artists such as Katy Perry, Nicki Minaj, and Beyoncé. My personal favorite is the ‘Spell Block Tango,’ which reimagines Chicago’s ‘Cell Block Tango’ with Disney villains as the incarcerated performers. Whilst many of Todrick Hall’s videos offer tongue-in-cheek fun, some deliver a more pointed message. ‘Cinderfella,’ for example, sees Cinderella transformed into a male, concluding with the message: “It’s time. Legalize love.” Borrowing heavily from Disney’s Cinderella (1950), Hall uses an image of “true love” and “happily ever after” ingrained in popular culture to highlight the need for marriage equality.

As Hall is a music artist as well as a YouTuber, he also writes and records his own songs. His most recent album, Straight Outta Oz (2016), is inspired by the events and characters of Baum’s The Wonderful Wizard of Oz (1900), and the iconography of the film adaptation The Wizard of Oz (MGM, 1939). In an interview with Rolling Stone, Hall explained that he has always felt a connection to The Wizard of Oz, both in childhood and as an adult member of the LGBT community. Through Straight Outta Oz, Hall uses this connection to reflect on his frustrations with the current socio-political climate, and to comment on contemporary issues such as racism and homophobia.

To conclude with a quotation from Emma Watson’s 2014 UN speech about HeForShe:

It is time that we all perceive gender on a spectrum, instead of two sets of opposing ideals.

This should be the case for both men and women, in fiction and in reality. It is my hope that children’s literature embraces its “radical potential” and helps to debunk gender binaries for both girls and boys.

As a side note: if anyone can recommend any children’s or YA literature that features drag, please comment on this post or send me an email! (vfdm2@cam.ac.uk)
For more information on drag and children’s literature, check out:

If you are interested in drag culture more generally, I would definitely recommend watching the 1990 documentary ‘Paris is Burning’ (now available on Netflix) as well as ‘RuPaul’s Drag Race’ (i.e. Netflix’s best reality show).