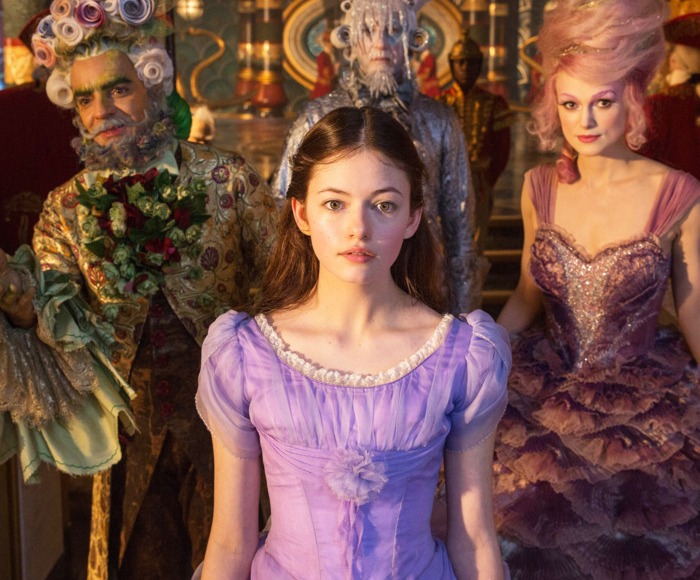 Madeleine Hunter is a third-year PhD candidate who studies adaptation in contemporary children’s media and is currently working on a chapter dedicated to what exactly Disney thinks its up to in this the twenty-first century.

Welcome to Disneyland Paris’s newest attraction! I assume, at least. It’s really the only thing that makes any sense. At least, that’s the conclusion that I, Catherine Olver, Michelle Anya Anjirbag, Vera Veldhuizen and Professor Maria Nikolajeva came to when we went to see this Fabergé Egg of a film last month. I spent most of our post-film discussion in shock – how could something be so astonishingly beautiful yet so breathtakingly empty?

I’ll admit, my dismay was largely self-inflicted; my expectations were unreasonably high. But it’s not my fault! I mean look at the poster!

It’s so beautiful! Look at the colours! The cast! The costumes! The folding of art nouveau aesthetics into the stylistic conventions of fantasy film posters so as to produce something that hearkens back both to Tchaikovsky’s 1892 ballet and to the beginnings of the contemporary fantasy film genre while also embodying the contemporary Hollywood blockbuster!

I was tricked, I tell you! Tricked!

My first year here at the CRCLC we had a special Christmas-themed advanced seminar dedicated to reading E.T.A Hoffman’s The Nutcracker and the Mouse King (1815). A solid choice – it’s set at Christmas and is one of those stories that we all more or less have an idea of without ever having actually sat down and read the book (see also: The Wonderful Wizard of Oz). And so read it we did, each of us tasked with applying our own critical lenses and backgrounds to a reading of the text. We talked fairy tales and fantasy, war in children’s fiction, clocks and temporality; Tchaikovsky, Fantasia and Matthew Bourne; Maurice Sendak and Alexandre Dumas, whose retelling of the story (fun fact!) served as the basis for Tchaikovsky’s ballet adaptation.

And yet, it’s still the experience of reading Hoffman’s text for the first time that stays with me the most vividly. Because here’s the thing about reading The Nutcracker and the Mouse King:

For the uninitiated, The Nutcracker and the Mouse King tells the story of seven-year-old Marie Stahlbaum who one Christmas takes a liking to a small wooden soldier only for him to come to life and whisks her away to a world made of candy and populated by toys come to life. It’s a story that is filled not only with toy soldiers and sugared almonds, but also with seven-headed mice and mechanical owls that speak in ominous rhymes; of automatons and curses, fevers and a deathlike sleep; a story in which much is not what it seems and all is presided over by the figure of Godfather Drosselmeyer, an elderly clock maker who gets about with a black eye patch and a glass wig and for whom the Nutcracker may or may not also be a surrogate? And same with the aforementioned owl? It is unclear… Also unclear is Marie’s fate. Over the course of the story, Marie cuts her self badly on a piece of glass, nearly bleeding out on the floor and contracting a fever as she attempts to recover. While the narrator informs us that she recovers, the tale also ends with Marie’s Nutcracker coming to life and taking her away to his Marzipan Castle where she will be queen forever. During our seminar, Maria asked us to look at the ending and floated her theory that the closure to the narrative actually signals Marie’s death at the hands of her fever. To quote Vera at the time, “I’m no expert but girl gets sick? Goes on a magical adventure that ends with her being taken away to a magical kingdom permanently ? Yeah, she dead”.

In short, there is menace in this tale, and when the teaser trailer for the film first dropped, it seemed as though this would be a film that leaned into these more sinister aspects, even as it simultaneously transformed the tale into an example of the fantasy blockbusters that currently dominate the global box office:

Unfortunately, this isn’t the film we get. The great shame about The Nutcracker and the Four Realms is how very ordinary it is. The clockwork motif worked into the title font is actually incredibly apt; the whole film does indeed feel like one of the ornate clockwork mechanisms from Hoffman’s tale – very pretty, but ultimately just going through the motions.

Our set-up to the adventure is trite, as we meet a post-Twilight Mackenzie Foy (good for her!) who is playing Clara – the name taken from the heroine of the Tchaikovsky ballet rather than Hoffman’s tale or Dumas’s retelling – who spends her time devising intricate mousetraps while discussing Newton’s laws of motion. We can tell she’s different because not only does she know about things like science and mechanics, but she also doesn’t know or care about hair and make up. She’s not a regular Victorian girl; she’s a cool Victorian girl. Apparently she’s been spending too much time in the attic by herself, although when we meet her in said attic she was hanging out with her brother and they seemed to be having a good time together? She’s also apparently selfish because she refuses to help her father maintain appearances in the aftermath of her mother’s death, and so we apparently have the fatal flaw that our character will have to overcome over the course of the narrative. Her mother was special too, and has left Clara a golden egg, accompanied by a note explaining that “everything you need is inside”. Of course, the egg needs a key that Clara doesn’t possess and so it’s off to Drosselmeyer’s Christmas party we go to find some answers! Drosselmeyer, it should be noted, is played in this version by Morgan Freeman and, despite indeed wearing the requisite eye patch, is not at all creepy. As such, he doesn’t really add much to the film. He appears to have been the guardian of Clara’s mother, and to know all about the four realms that Clara’s mother both discovered and created – it does not make sense – but besides smiling benevolently and owning a pet owl, that’s about it.

Once we’re into the fantasy-world, all attempts at building a compelling narrative are off. Clara seems not at all surprised that she has been able to follow a thread from her godfather’s house all the way into an entirely new world. She immediately gives chase to a CGI mouse only to be stopped by a nutcracker soldier who, despite looking fabulous in gold lip liner, makes several comments throughout the film about “knowing his place” that don’t really add anything substantial to either the plot or the character and when spoken by an actor of colour make for uncomfortable viewing at best. But his last name is “Hoffman”, so take that anyone who wants to complain about deviation from source material! From this point on its just a matter of moving Clara through the lavish world superintended by Guy Hendrix Dyas. If you haven’t seen the film – and let’s be honest, I’m not exactly selling it to you here – head over to Bleeding Cool to check out some of the concept art for the four realms themselves, because they really are stunning. There is a rich, stunningly articulated world here; it’s just completely devoid of any underlying logic or overlaying narrative path that one can follow through it. The one exception is Keira Knightley’s performance of the Sugar Plum Fairy, which is excellent and hints at what I think this film thinks it’s about. Knightley plays Sugar Plum as a little girl’s vision of an elegant lady – all frothy fripperies and throwaway lines of French – but possessed of a childlike-sense of emotional control and empathy. She is an abandoned doll who seeks to eradicate the quite literally maternal Mother Ginger for reasons that…completely escape me. I think there’s meant to be some lesson for Clara about taking responsibility for the effect one’s actions can have on others? About not taking your grief out on others? I’m really not sure and I think if we follow the thread too far we end up somewhere very oedipal so I’m just going to stop.

Disney’s adaptation of The Nutcracker comes at a time when the company is engaged in a fierce campaign of revival and (re)incorporation, absorbing new properties into the imagined terrain of the Magic Kingdom, while remaking those that reside in its back catalogue. The Nutcracker and the Four Realms, as it turns out, is an example of both. Remember when I mentioned Fantasia earlier?

The above still comes from what is easily the high point of the film, a scene in which a ballet is performed for Clara as a means of explaining how her mother came to find the Four Realms and the threat they now apparently face in her absence. It actually explains nothing, but it is very, very pretty.

Pretty actually doesn’t do it justice. It’s breathtaking. The sequence stars Misty Copeland as an otherwise unnamed Ballerina Princess who twirls and jetés her way across the stage, flowers bursting to life beneath her feet as though emerging from a pop-up book. The effect is maintained throughout the whole sequence, as the film’s play-within-a-film seeking to evoke the feel of a toy theatre – itself a popular nineteenth century amusement – complete with brightly painted paperboard, pantomime mice and a whole host of ingenious wind-up contraptions. The sequence is a multilayered homage to the text’s adaptive history reframed through the magic of contemporary VFX.

It’s these moments of thoughtfulness, of attention to detail mixed with opulent creativity that make this film so astonishingly unsatisfying. In my own research, I am constantly irritated by people whose response to our contemporary media ecology’s predilection for the remade and the retold is to simply cry capitalism, usually accompanied by a sneer and/or dismissive shrug. This film is the closest I’ve come to feeling that same cynicism, and I would embrace it, were it not for sequences like the above. How can there be such a dissonance between the art direction and production design of a film, and the story that that film tells? There are slivers of a much better movie here, moments where a move of the camera, a transition between shots or the styling of scene leans in to the uncanny nature of the source texts and hints at the Labrynth-esque, Dark Crystal level weirdness that this film could have been!

There’s very nearly a whole other film contained within the end credits sequence – which, coincidentally, is the only other time we see Misty Copeland. Really, they should have just built the whole film around these two dance sequences and Knightley’s Sugar Plum – a performance which, some have argued, deserves an Oscar. But they didn’t, and so what we’re left with is something not wholly dissimilar to a toy theatre: very ornate, very cleverly put together, but fundamentally empty.