Jodie Coates is a current MPhil student at the University of Cambridge’s Centre for Research in Children’s Literature. She studied Education with English and Drama at the Faculty of Education as an undergraduate and is thrilled to have returned to Cambridge after a two-year hiatus of teaching and crab-picking.

“… And Bryher remains the place where we feel we belong, our home on Scilly. For me it has become my Narnia.” – Michael Morpurgo

From the mermaid lagoons of Neverland to the shipwrecks of Kirrin, the mutinous pirates of Treasure Island to the Vikings of Berk or the Amazons of Wild Cat Island, the coconut trees of Motunui to the turpentine-trees of Terebinthia (and Terabithia, for that matter), there are plenty of wonderful fictional islands for children to visit. Boats, buccaneers, beaches and bottles of ginger beer are recurrent features, as are themes of survival, independence, nostalgia for the sun-drenched halcyon summer holidays of childhood and an appreciation of the dangers and delights of a wild, but equally contained, natural playground.

Some of the more fantastical islands rise from the oceans of childhood imagination, found beyond the stars, framed as liminal and intangible realms of youth. Others are more grounded, emerging on the horizon out of misty, uncharted waters – or at least a decent stretch of water away from mildly concerned parents – spotted by sea-savvy young sailors, waiting to be claimed and explored. But is it all plain sailing and buried treasure chests when it comes to real-life islands?

On a scorching hot October day in 2017, a jet boat named ‘Hurricane’ sped my parents and I over crystal clear, sparkling waters towards our new life on Bryher, the smallest inhabited island of the Isles of Scilly. Not unlike the cyclone that whisked Dorothy away to Oz, I found myself suddenly very far away from home, amongst spiralling succulents, washed up jellyfish and bright orange seashells.

Figure 1- The Isles of Scilly vs. Disney’s Neverland.

The Isles of Scilly is a subtropical archipelago in the Atlantic Ocean, a few hours by South of Land’s End via the passenger boat, the ‘Scillonian’, or a twenty minute ride in a ten-seater ‘Skybus’. Bryher is small – approximately 1.5 miles long and 1 mile wide, with around 80 residents. I’ve heard it affectionately referred to as the ‘wildest’ of the five populated islands (there are 140 islands in total!), the other four being Tresco, St Martin’s, St Agnes and the hub of St Mary’s. Perhaps BBC’s William Whiskerton, the mouse explorer , might do a better job of explaining the basics of Bryher, if you’d like a quick overview. 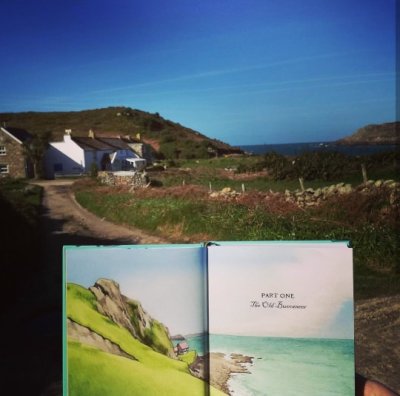 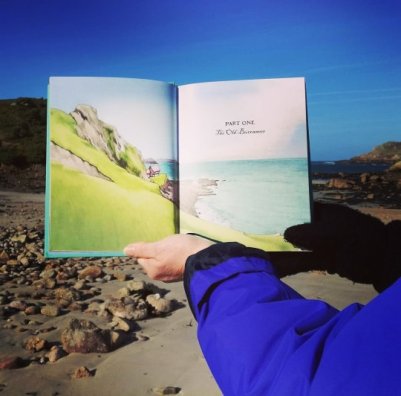 Hopping off the Hurricane, we trundled our suitcases directly onto the white sands of Bryher’s Green Bay, squinting in the sunshine, feeling a little like we’d stepped into a 21stcentury adaptation of The Swiss Family Robinson. Moving home can be quite unsettling, particularly if it involves a rather dramatic lifestyle change, and I found myself turning to books to centre myself. Treasure Island seemed to be a good place to start, and I was thrilled that my illustrated copy seemed to mirror the landscape exactly. Taking my cue from Jim, I poured over a map of Bryher, getting my bearings as I explored Hell Bay (named after the hellishly large, crashing waves), Droppy Nose Point, Shipman’s Head, Popplestones Beach and Hangman’s Rock (complete with noose) – names that wouldn’t seem out of place on a treasure map alongside Barrie’s Skull Rock or Cowell’s Death’s Head Headland. I was utterly enchanted, and began crafting my own adventure stories in my head.

Unsurprisingly, I am not the first literature lover to be inspired by the the charm of Bryher. Children’s Laureate (2003-2005) Sir Michael Morpurgo had written not one, but five books based on the Isles of Scilly and Bryher in particular: Why the Whales Came (1985), Arthur: High King of Britain (1994), The Wreck of the Zanzibar (1995) and The Sleeping Sword (2002). Morpurgo frequently holidays on Bryher calling it his ‘home from home’:

“Bryher is our island. Visitors as well as islanders are fiercely loyal. Some people prefer Tresco or St Agnes or St Martin’s or St Mary’s. They are all wrong!  Bryher is best.”

Figure 3 – Postcard of Bryher and map of Kensuke’s Kingdom. Similarly shaped, and both include ‘Watch Hill’

Morpurgo often uses short notes at the start of his stories to introduce the child protagonist in first person, claiming that the tale about to unfold is ‘true’ (a technique he also uses in Kensuke’s Kingdom, which was on the MPhil reading list this year). In fact, the surnames used for the fictional children of Why The Whales Came, Gracie Pender and Daniel Jenkins, are taken from centuries-old established island families. Incidentally, I was employed as a fellow crab-picker by the friendly Pender family last summer, who made me feel incredibly welcome on Bryher. The hand-drawn maps at the start of the book also help to convince the reader that these magical islands exist in reality – and of course they do, though sans Excalibur or the mysterious ‘Birdman’. They are essentially love letters to the islands, capturing their natural beauty, unique character and history.

To my delight, Morpurgo had donated some signed copies of his books to the Bryher community center for islanders and visitors alike to peruse. In ‘The Town’ is a red telephone box, used as a minature museum, documenting the cinematic adaptation of Why The Whales Came (When the Whales Came, 1989, Trailer), including newspaper cuttings and a copy of the original screenplay behind the glass. Starring Helen Mirren and Paul Scofield, it was filmed on Bryher and rather authentically a young islander, Helen Pearce, was cast as Gracie (see short documentary) 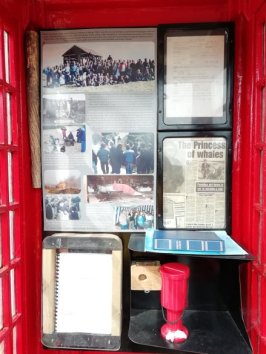 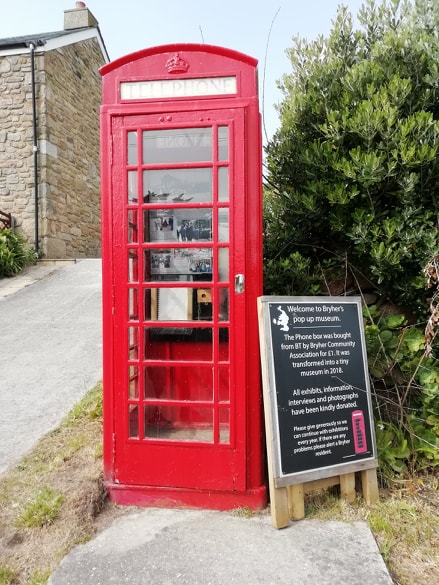 I was fortunate to spend a year living and working on Bryher, sailing to the ‘haunted’ island of Samson as Gracie and Daniel do in Why The Whales Came and jumping from Bryher’s quay as Bun Bendle does in The Sleeping Sword (thankfully without accident). On returning to Cambridge last October, I found myself drowning in noisy traffic and plunged into an ocean of unknown faces with a distinct lack of a sea breeze. It was all a little overwhelming. Once again, I turned to books to ground myself. This time I pulled Why The Whales Came from the Ed Fac library bookshelf and sat contemplating the map of the place I had come to call ‘home’. In that moment, it was as if the last year had existed only in my imagination – a fictional adventure on a beautiful, remote island, far removed from the hustle and bustle of the mainland. But it was real, and I’m thankful that, thanks to Morpurgo, I can walk Bryher’s beaches and cliffs whenever I like through the pages of his books, until I can return. 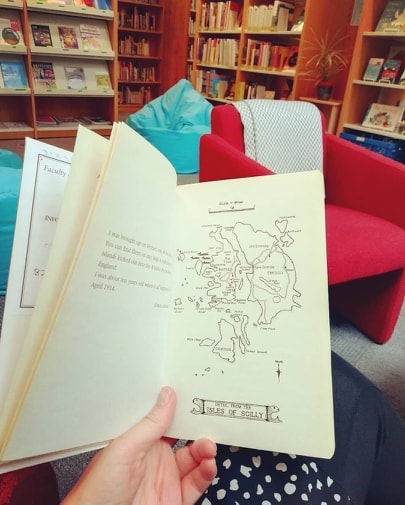 Stage adaptation of Why The Whales Came:
https://www.youtube.com/watch?v=hV6jKxV1y3A