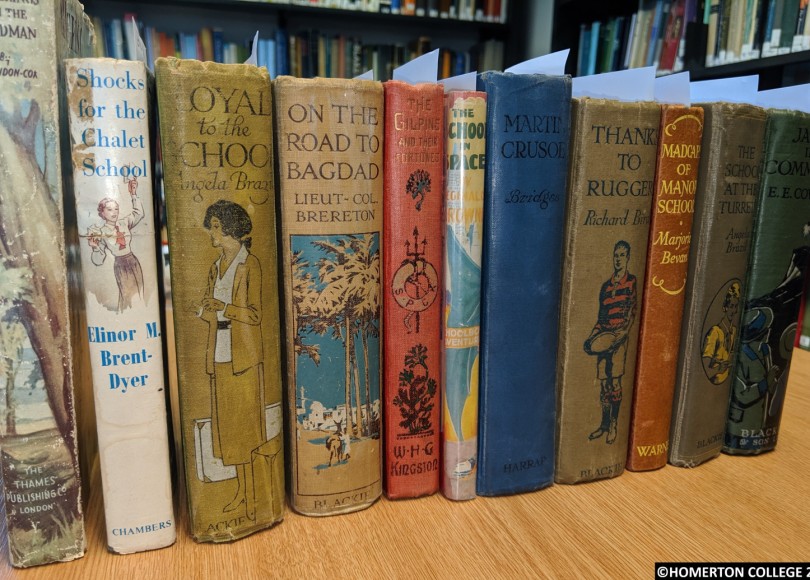 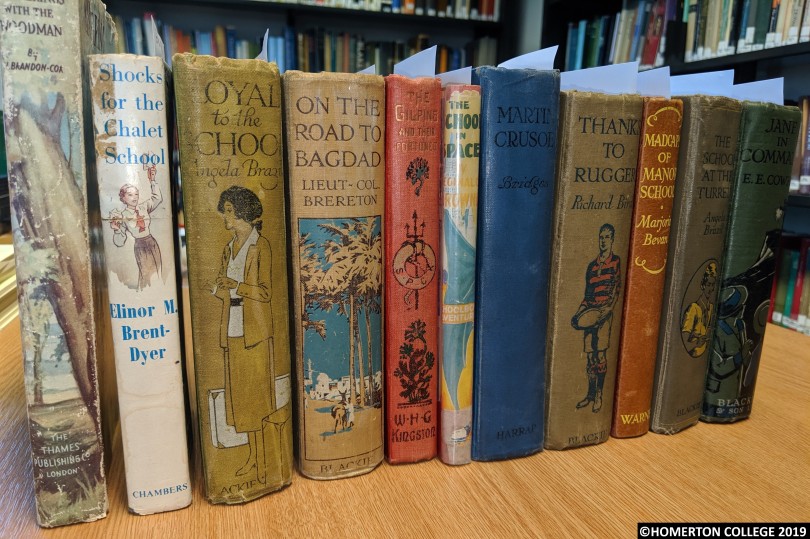 A blog post of mine from last year, here, introduced the Lealan Collection of children’s literature, a significant addition to the library’s special collections that the College acquired several years ago. I’m now deep into the work of cataloguing the monograph element of the collection: the children’s novels, short stories and poems that make up a sizeable chunk of the over seven thousand items in Lealan.

This post will, using several of the works so far catalogued, offer an insight into the kind of research that is undertaken when cataloguing rare books. This will include areas such as dating, provenance and what makes a book rare. I will also look at a couple of interesting items from the realms of science fiction and fantasy. This is in no way an exhaustive update, and does not follow a strict correlation: some items already catalogued may feature in later blog posts.

To locate any of the items mentioned in this post, simply type the classmark directly into the search box on iDiscover.

First published in 1865, The Gilpins and Their Fortunes (classmark: LEA.MON.506), by W.H.G. Kingston, tells the story of two young brothers who leave England and head to Australia to seek fortune and adventure. Our copy is a later edition dating from somewhere between 1912 and 1916.

The author, William Henry Giles Kingston (1814-1880) was educated at Trinity College, Cambridge, and lived for many years in Portugal as a wine merchant. A full time writer in his later years, he is known for his many tales of adventure, often set at sea and the wildernesses of North America and Africa. This item is not just significant for its scarcity and content, but also for its unusual provenance.

The image above is of the inscription from the front pastedown (the bookbinder’s term for the endpaper pasted to the inside of the front cover). It reads:

This brought to mind an old television programme on the paranormal (possibly Strange but True?) that mentioned the case of Arthur Flowerdew, a man from Norfolk who claimed to have lived a past life in the ancient city of Petra in Jordan. From a young age he had had vivid recurring dreams of a life in an ancient city, and later recognised the place, in a BBC documentary, as Petra. Taken there, he was reportedly able to explain the function of some buildings and features that had puzzled archaeologists for years, and supposedly knew things that he couldn’t possibly have known. You can read more about the case here. As you can see from that page, there is obvious scepticism.

Whatever your view, the case is nonetheless intriguing. Seeing this uncommon name inscribed in the book, I dug a little deeper to try to confirm that it was indeed the same man. Firstly, he would have been 10 years old in Christmas 1916, the right age for a novel such as this to be an apt Christmas present. I found that his birth was registered in the district of Great Yarmouth, which is close to Repps. I also discovered that this same Arthur Flowerdew is buried in St Peter’s churchyard, Repps. This is all I think compelling evidence to conclude it is the same Arthur Flowerdew.

The Gilpins is one of 15 titles we have by W.H.G. Kingston in the Lealan Collection.

Many of the items in the Lealan Collection are out of print, and several are particularly scarce. Whether a book is ‘scarce’ or not is of course quite subjective. How easy it is to acquire or replace an item may be a more appropriate measure. Most academic libraries, though, have certain criteria for when to treat items as ‘rare’. The special collections library of St Andrew’s University, for example, specifies that if there are five or fewer copies of a particular version of a work in the shared library catalogues of COPAC and WorldCat, then it can be considered ‘scarce’. There are a good number of items in the Lealan Collection that meet this description.

These are just a few of the titles from the collection which meet this criterion:

The Adventures of Paddy the Beaver by Thornton W. Burgess (1950 reprint; first published 1917) – Only two copies of the UK first edition on COPAC/WorldCat; there are several US first editions from 1917. It is very scarce even in this reprinted version. (LEA.MON.202). Thanks to Rugger by Richard Bird (1928) – Four on COPAC/WorldCat including the British Library copy. There is either no copy at Cambridge University Library or it has not been catalogued. (LEA.MON.97).

The Bird item is so rare that I can’t even find any later reprints of it for sale anywhere, so it is quite literally irreplaceable.

There are many ways to date a book. Future blog posts about Lealan will look at more ways of dating, but here are few to start with. 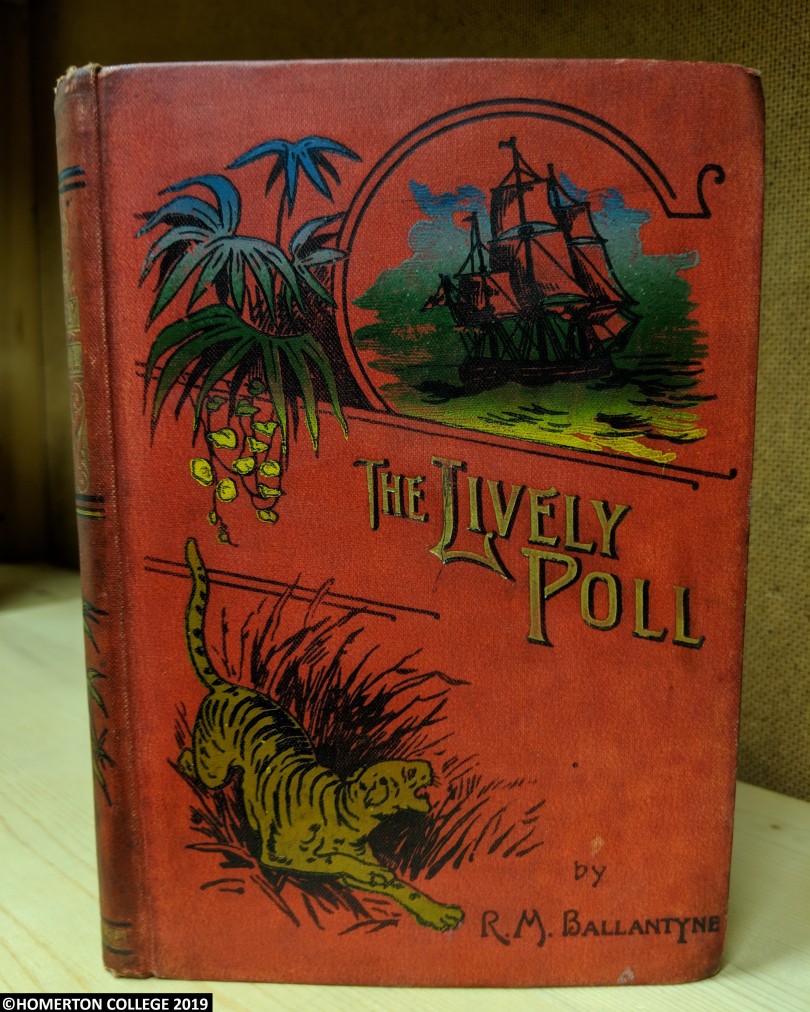 Given the similarities between this copy and the information that is available about the first edition, it would be tempting to assume that this is a first impression. This is a common pitfall. It is in fact a later reprint, and there are several ways we can tell this. Firstly, we can see from the title page that the publisher name has ‘limited’ in it. James Nisbet did not become a limited company until 1898. So we know that it was not printed before this. Secondly, the printer statement, as seen in the image below of the final page from our copy of The Lively Poll, refers to ‘Her Majesty’, i.e. Queen Victoria, who died in 1901, so this gives us our upper date. 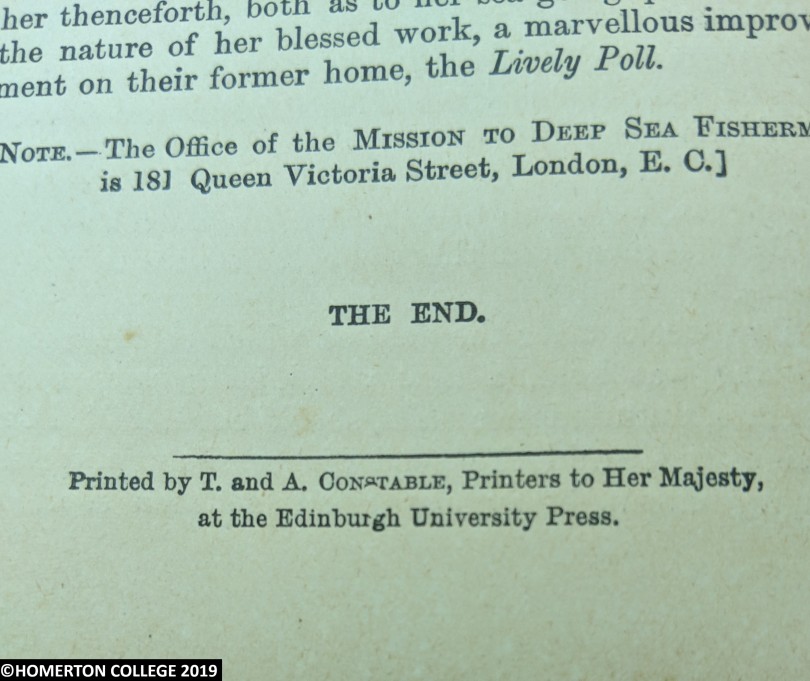 Another way of dating a book is if there is a printer’s code present.  The image below is of the printer’s code present in Homerton’s copy of Madcaps of Manor School by Olive Fairhall (Marjorie Bevan). (LEA.MON.84). This title was originally published in 1949 but we can ascertain from the printer’s code on the colophon that this version is a reprint. It reads: 37.1151. The part after the full stop is the date element. 11 [month] 51 [year], i.e. November 1951.

The list of other titles by the same author, and the publisher’s address history, can also often yield clues. The School at the Turrets by Angela Brazil (LEA.MON.162) was published in 1935, but we know that Homerton’s copy must be a later impression because the most recent work on the publications list inside the book (pictured below) is The School on the Moor (1939). 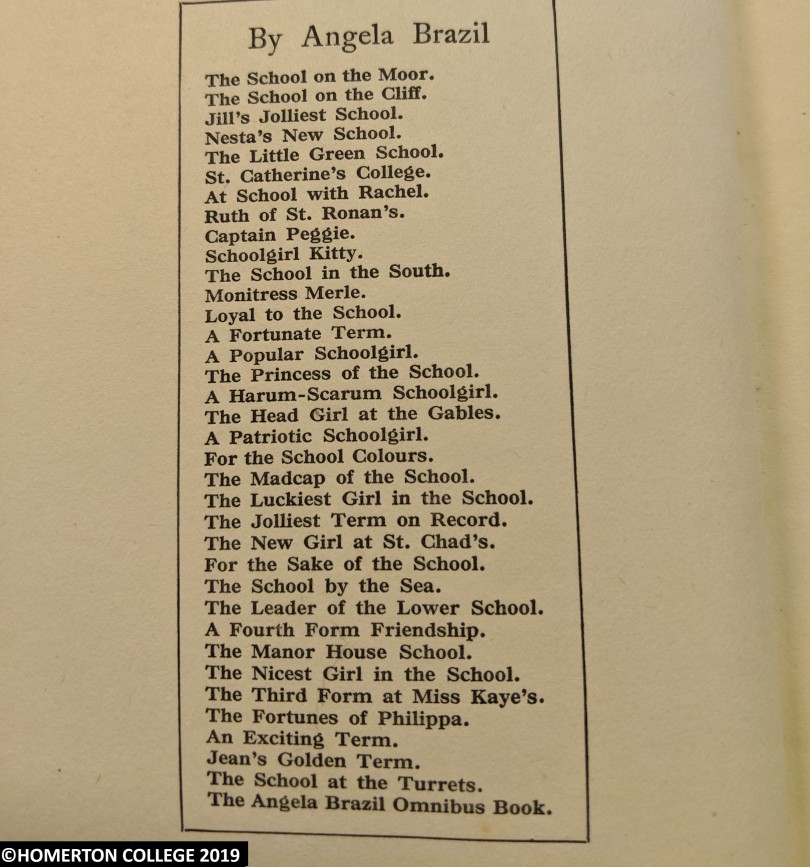 Our copy probably is from 1939, but we can’t be 100% sure. It is certainly no later than 1941, because 50 Old Bailey is given as a publisher address for the publisher. Agnes Blackie, in her history of the firm, says that this premises was bombed out in May 1941. It seems unlikely therefore that the publishers would have continued to print this address on their books much later than that.

Edwy Searles Brooks (11 November 1889 – 2 December 1965) was a British novelist who used a number of pen names, one of which was Reginald Browne. A prolific writer, according to his Wikipedia page he wrote some 40 million words in his lifetime.

This first edition of The School in Space (1947) (LEA.MON.187) by Reginald Browne is not terribly scarce on bookseller websites but is surprisingly rare in academic libraries, with only three or four UK institutions on the shared catalogues holding copies; though this excludes any uncatalogued copies there may be. The fantastic, colourful dust wrapper illustration (pictured above) quite explicitly depicts what this novel is about: school boys meeting aliens. A curious combination of the traditional British school story with the pulp science fiction popular in the 1930s and 1940s.

An interesting example of a novel in the ‘lost world’ subgenre of fantasy/science fiction is Martin Crusoe (LEA.MON.180), an action-packed novel where the eponymous young hero visits Wizard Island, a relic of the mythic Atlantis. First published in 1920, this was one of a number of Sci-Fi stories for young adults written by French-born British author Thomas Charles Bridges (1868-1944), whose career spanned nearly 50 years and included many fantasy, science fiction and adventure stories, such as the intriguingly-titled dystopian novel The Death Star (1940). Our copy is a second edition, still quite rare, from 1923. Martin Crusoe is one of seven titles we have by T.C. Bridges in the Lealan Collection.

Pictured below is one of the book’s illustrations by Liverpudlian artist George Henry Evison (1871-1928). 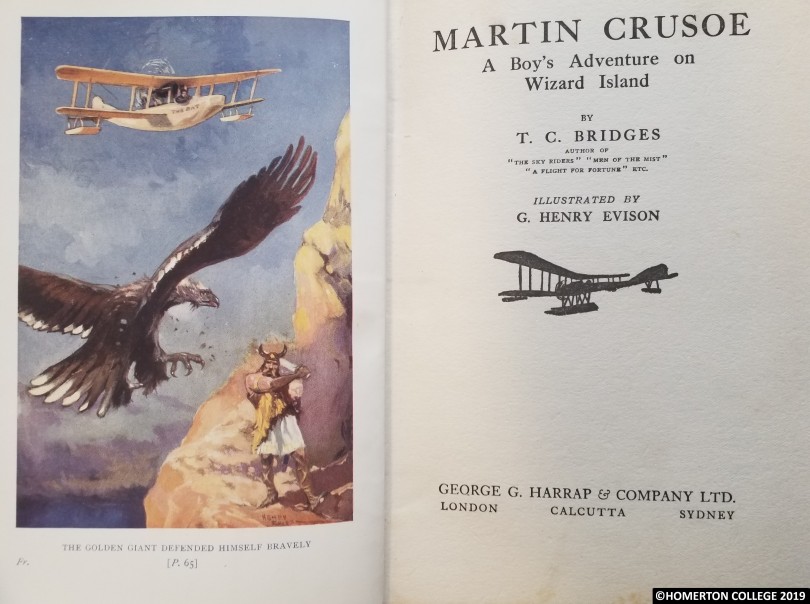 A few other exceptional items

My First Nature Book: The brownie’s magic and other stories by Enid Blyton (1953 reprint; first published 1952). Very scarce even in this reprinted edition. (LEA.MON.115). 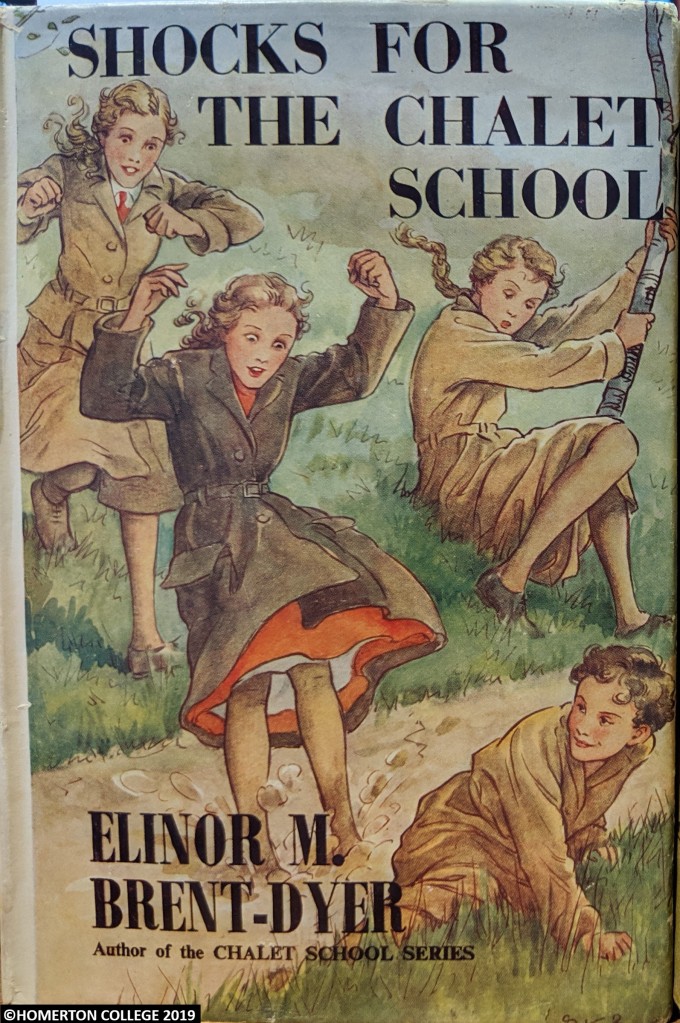 Odd Made Even by Amy Le Feuvre (c. 1900). A very scarce first edition with illustrations by Harold Copping. (LEA.MON.552). 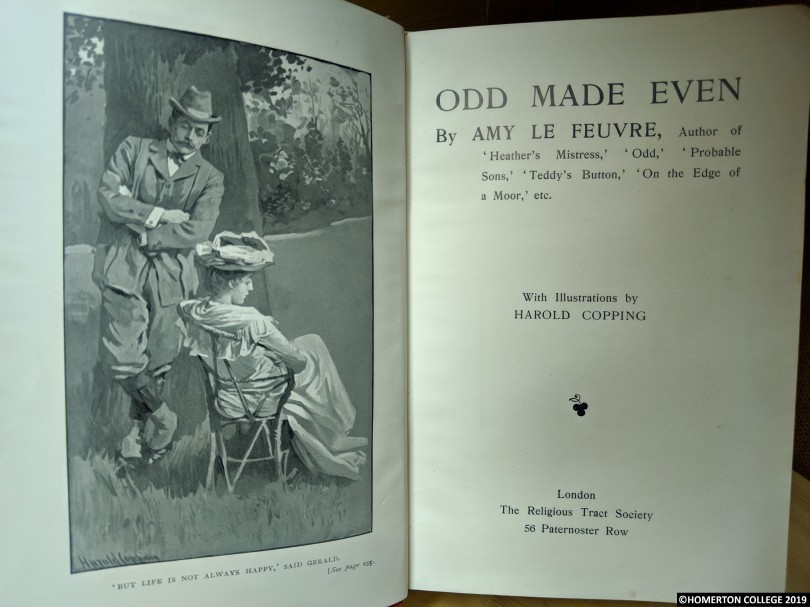 These books are a selection from the items that I have catalogued so far (a snapshot of my progress pictured below). Future blog posts will not only feature more stand-out items that have passed through my hands, but will also include thematic posts (concerning some of the genres and subjects present in the collection), and more about the business of rare book cataloguing. 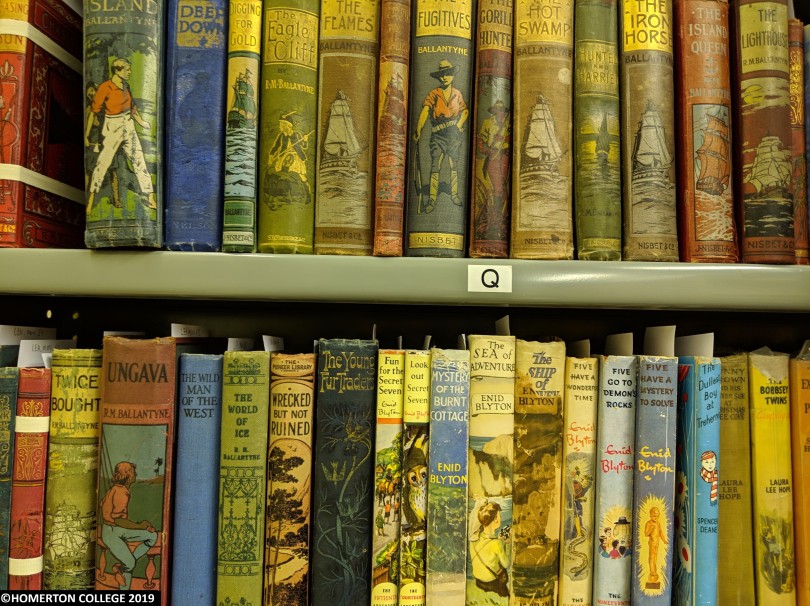 If you would like more information about this collection, please come in and speak to a member of the library staff, contact me directly on jb719@cam.ac.uk or speak to me in person, on the first floor of the library.